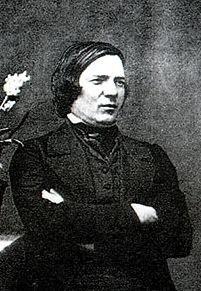 Robert Schumann was a German composer, pianist, conductor and critic. He studied law at Leipzig and Heidelberg University, but his main interests were music and Romantic literature, e.g. Jean-Paul Richter. In 1828, Robert met Clara Wieck, to whose father Friedrich he went for piano lessons in 1829, lodging with him and beginning to compose. In 1832, he permanently injured his right hand by a device he had invented to keep 4th finger immobile while practising. Robert was already contributing music criticism to Germany papers and in 1831 called attention to Chopin's genius. Depressed by music situation in Germany, he founded David Club in 1834 to fight artistic philistines, and periodical in Neue Zeitschrift für Musik, which he edited for 10 years. In writings and compositions, Robert gave himself dual personality: Florestan for his impetuous self and Eusebius for his contemplative side. In 1838, he visited Vienna and discovered MS of Schubert's Great C major symphony, which he sent to Mendelssohn.

Robert Married Clara Wieck 1840 after long opposition from her father. This was followed by outpouring of songs and song-cycles. In 1841, Robert concentrated on symphonies, in 1842 on chamber music, and in 1843 choral works. He taught composition at Leipzig Conservatory and Toured Russia with Clara in 1844. On return he had severe attack of depression and moved to Dresden in search of quiet and lived there until 1850. In 1850, Robert moved to Düsseldorf in hope of earning more by conducting but without success. He met with the 20-year-old Brahms in 1853, acclaiming him in an article as New Paths. The next year his mental health failed and he threw himself into Rhine, but was saved and taken to private asylum where he lived another 2 years.

Schumann was one of the greatest composers for piano, enriching its literature with a series of poetic works in which classical structure and Romantic expression are combined. His vocal and chamber music is of comparable quality, with the freshness, vitality, and lyricism which also characterize the orchestra works. His orchestration is sometimes criticized for its thickness and lack of fluency, and various attempts have been made to 'improve' the scoring, e.g. by Mahler, but the present-day tendency is to prefer the spontaneity of Schumann's own. His songs, particularly his song-cycles, are among the glories of Lieder. His works contain many musical quotations and allusions and a number of his themes have been shown to be musical cryptograms.