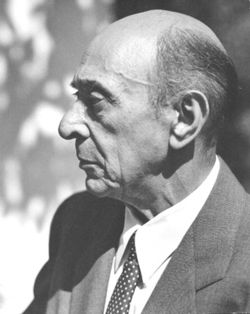 Arnold Schönberg was born to an Ashkenazi Jewish family in the Leopoldstadt district (in earlier times a Jewish ghetto) in Vienna. Although his mother Pauline, a native of Prague, was a piano teacher (his father Samuel, a native of Bratislava, was a wealthy shopkeeper), Arnold was largely self-taught, taking only counterpoint lessons with the composer Alexander von Zemlinsky, who was to become his first brother-in-law. In his twenties, he lived by orchestrating operettas while composing works such as the string sextet Verklärte Nacht ("Transfigured Night") in 1899. He later made an orchestral version of this, which has come to be one of his most popular pieces. Both Richard Strauss and Gustav Mahler recognized Schoenberg's significance as a composer, Strauss when he encountered Schoenberg's Gurre-Lieder, and Mahler after hearing several of Schoenberg's early works. Mahler adopted Schoenberg as a protégé and worried about who would look after him after his death. Schoenberg, who criticized Mahler's first several symphonies, was nevertheless influenced by Mahler's art, championed his work and considered Mahler a "saint." Despite his Jewish background, Schoenberg was brought up as a Catholic, and in 1898 he converted to Lutheranism. He would remain Lutheran until 1933.

The summer of 1908, when his wife Mathilde left him for several months for a young Austrian painter, Richard Gerstl (who committed suicide after her return to her husband and children), marked a distinct change in Schoenberg's work. It was during the absence of his wife that he composed "You lean against a silver-willow" (German: Du lehnest wider eine Silberweide); the first piece without any reference at all to a key. Also in this year he completed one of his most revolutionary compositions, the String Quartet No. 2, whose first two movements, though chromatic in color, use traditional key signatures, yet whose final two movements, set to poems by German mystical poet Stefan George, weaken the links with traditional tonality daringly (though both movements end on tonic chords, and the work is not yet fully non-tonal) and, breaking with several centuries of string-quartet practice, incorporate a soprano vocal line.

Another of his most important works from this atonal or pantonal period is the highly influential Pierrot Lunaire, op. 21, of 1912, a cycle of expressionist songs set to a text by Albert Giraud that was unlike anything that preceded it. Utilizing the technique of Sprechstimme, or speak-singing recitation, the work pairs a female singer, in a Pierrot costume, with a small ensemble of 5 (nowadays sometimes 6) musicians, which plays a different instrumental combination in each of the songs.

Later, Schoenberg was to create the dodecaphonic (also known as twelve-tone) method of composition (which later grew into serialism, even though he, himself, is not considered a serialist). This technique was taken up by many of his students, who constituted the so-called Second Viennese School. They included Anton Webern, Alban Berg and Hanns Eisler, all of whom were profoundly influenced by Schoenberg. He excelled as a teacher of music, partly through his method of engaging with, analyzing, and transmitting the methods of the great classical composers, especially Bach, Mozart, Beethoven, and Brahms, partly through his focus on bringing out the musical and compositional individuality of his students. He published a number of books, ranging from his famous Harmonielehre (Theory of Harmony) to Fundamentals of Musical Composition, many of which are still in print and still used by musicians and developing composers.

He was forced into exile by the Nazis in 1933 and emigrated to Paris, where he reaffirmed his Jewish faith, and then to the United States. His first teaching position in the United States was at the Malkin Conservatory in Boston. He was then wooed to Los Angeles, where he taught at the University of Southern California and the University of California, Los Angeles, both of which later named a music building on their respective campuses Schoenberg Hall. He settled in Brentwood Park, where he resided for the rest of his life.