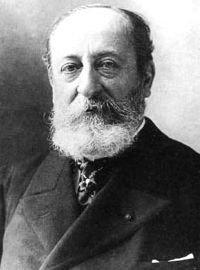 Charles-Camille Saint-Saëns was born 9 October 1835 in Paris, France. After his father died, just three months after his birth, his mother, Clémence, sought the assistance of her aunt, Charlotte Masson. By age two, Saint-Saëns was found to possess perfect pitch and about this time his aunt introduced Saint-Saëns to the piano, giving him lessons on the instrument.

His first composition, a little piece for the piano dated 22 March 1839, is now kept in the Bibliothèque nationale de France. At five years of age he accompanied a Beethoven violin sonata in his first public concert appearance. He also began an in depth study of Mozarts Don Giovanni. Not only did he show substantial musical abilities in his early childhood, he learned to read and write by age three, and had some mastery of Latin by the age of seven. He would show the same genius in learning languages and advanced mathematics as well as a life-long interest in geology and astronomy.

In 1842, at age seven, Saint-Saëns began piano lessons with Camille-Marie Stamaty (a pupil of Friedrich Kalkbrenner) and composition with Pierre Maledin. At ten he gave his debut public recital at the Salle Pleyel, performing Beethoven's Third Piano Concerto, Mozart's Piano Concerto in B-flat major (K. 450), and pieces by Handel, Kalkbrenner, Hummel, and Bach. As an encore, Saint-Saëns offered to play any of Beethoven's 32 piano sonatas from memory. Word of this incredible concert spread across Europe, and as far as the United States.

In 1848, at age thirteen, Saint-Saëns entered the Conservatoire de Paris where he studied composition with Fromental Halévyand as well as organ. By his early twenties, following the composition of two symphonies, he had won the admiration and support of Berlioz, Liszt, Gounod, Rossini, and other notable figures.

From 1853 to 1876, Saint-Saëns held church organist posts, his first appointment being at the Saint-Merri in the Beaubourg area and then In 1857, the Église de la Madeleine, which he kept until 1877. His weekly organ improvisations stunned the Parisian public and earned Liszt's 1866 observation that Saint-Saëns was the greatest organist in the world. During these years he composed the Symphony in F "Urbs Roma" (1853), a mass (1855) and several concertos, including the popular second concerto for piano (1868).

From 1861 to 1865 Saint-Saëns taught at the École Niedermeyer where he included contemporary music by Liszt, Gounod, Schumann, Berlioz, and Wagner along with the school's conservative curriculum of Bach and Mozart. Among his most notable students were André Messager and Gabriel Fauré, who was Saint-Saëns's favourite pupil and would become his closest friend.

In 1870, the Franco-Prussian War, though lasting barely six months, left an indelible mark on the composer. Though Saint-Saëns was relieved from fighting duty as one of the favorites of a relative of emperor Napoleon III, he fled to London for several months when the Paris Commune broke out in the besieged Paris of the winter of 1871. His fame and societal status posed a threat to his survival. In the same year, he co-founded with Romain Bussine the Société Nationale de Musique in order to promote a new and specifically French music. After the fall of the Paris Commune, the Society premiered works by members such as Fauré, César Franck, Édouard Lalo, and Saint-Saëns himself. Through the Société Saint-Saëns became a powerful figure in shaping the future of French music.

In 1875, Saint-Saëns married Marie-Laure Truffot and they had two children, André and Jean-François, who died within six weeks of each other in 1878. Saint-Saëns left his wife three years later. The two never divorced, but lived the rest of their lives apart from one another. During this dark period in his life, he produced some of his most popular works, including Danse macabre (1875) and Samson et Dalila (1878). After these tragic events of his marriage, Saint-Saëns developed a fondness for Fauré and his family.

In 1886 Saint-Saëns debuted two of his most renowned compositions: The Carnival of the Animals and Symphony No. 3 (dedicated to Franz Liszt, who died that year). After its première during a private performance on 9 March, 1886, Saint-Saëns forbade complete performances of The Carnival of the Animals, allowing only one movement, Le cygne (The Swan) for cello and two pianos, to be published in his lifetime. Saint-Saëns wrote Carnival as a musical jest, and thus he believed that it would damage his reputation as a serious composer. That same year Vincent d'Indy and his allies had Saint-Saëns removed from the Société Nationale de Musique. Despite his strong advocacy of French music, Saint-Saëns openly despised many of his fellow-composers in France including d'Indy, Franck, and Massenet. Saint-Saëns also hated the music of Claude Debussy.

Saint-Saëns remained very close to his mother, who had opposed his marriage to Truffot. When she died in 1888, the composer fell into a deep depression, even contemplating suicide for a time. The mourning composer left France for the Canary Islands, traveling under the alias "Sannois". Over the next several years he traveled around the world, visiting exotic locations in Europe, South America, Southeast Asia, and North Africa, where he developed an interest in Algeria and Egypt and was inspired to write Africa (1891) and his Piano Concerto No. 5, the "Egyptian". Saint-Saëns chronicled his travels in many popular books under his pen name, Sannois.

In 1908, Saint-Saëns became the first celebrated composer to write a musical score for a motion picture, L'assassinat du duc de Guise (The Assassination of the Duke of Guise), a movie of 18 minutes duration (a considerable run time for the day.)

After 1890, Saint-Saëns' music was regarded with some condescension in his homeland, while in England and the United States he was hailed as France's greatest living composer well into the twentieth century. Saint-Saëns experienced an especially triumphant concert tour when he visited the U.S. in 1915 where he was a guest conductor with the San Francisco Symphony Orchestra during the Panama-Pacific International Exposition, one of two world's fairs celebrating the completion of the Panama Canal.

In the last two decades of his life, Saint-Saëns continued to write on musical, scientific and historical topics. He traveled frequently before spending his last years in Algiers, Algeria. In recognition of his accomplishments, the government of France awarded him the Légion d'honneur.


--Scott Pittman (more on the author)