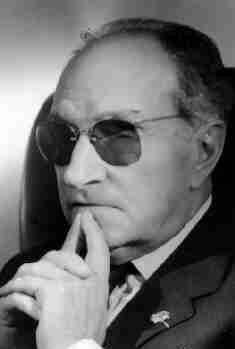 Joaquín Rodrigo was born in 1901, in Sagunto in the province of Valencia, Spain. As a result from diptheria, and an unsuccessful eye surgery, he became blind from the age of three. In his own opinion, this misfortune predisposed him for a career in music. From the age of eight onwards, he studied piano as well as violin at a school for the blind, and was already an accomplished pianist at the age of 20. His first compositions for piano were written in 1923 and premiered a year later. In 1927 Rodrigo moved to Paris where he studied with Paul Dukas and befriended Manual de Falla.

Rodrigo composed many works for orchestra, and concertos for various instruments and orchestra (flute, piano, violin, and guitar) as well as a sizeable body of piano music. But he is most famous for establishing the guitar as a classical concert instrument - even though he did not play the guitar himself. His 'Concierto de Aranjuez' (1939) was the first concertante work for guitar and orchestra, and has become the most famous and recorded guitar concerto of all times. The haunting slow movement contains one of the most popular and indestructable melodies of all classical music, which has been transcribed for many instruments (Miles Davis' jazz trumpet one of them). Another popular work for the same forces is the 'Fantasia para un Gentilhombre'. His other works include ballets, film scores, operettas, vocal pieces, and over 25 pieces for guitar.

Rodrigo's tonal idiom is mostly neoclassical, harmonically advanced yet shot through with influcences from the great musical past of Spain. Gypsy and moorish influences are also discernible, although less prominent than in the works of his friend Falla. Transparent and bright textures, often favouring high-lying registers, are a hallmark of both his orchestral and instrumental writing.

Because of his blindness, Rodrigo composed in braille (using a special machine), and later dictated the music to a copyist. He received the highest awards from both the Spanish and French governments, as well as six honorary doctorates from universities worldwide. He died in 1999 and was buried in his beloved Aranjuez, next to his wife Victoria who had died two years earlier.