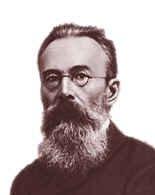 Nikolay Andreyevich Rimsky-Korsakov, Russian composer and conductor, was born in Tikhvin (1844) and died in Lyubensk (1908). He was born into an aristocratic family and received a conventional music education. However, his initial ambition was to be a sailor, and at the age of twelve he entered the Corps of Naval Cadets in St Petersburg, eventually reaching the rank of naval lieutenant, and doing active service at sea between 1862 and 1865.

Throughout his naval career, Rimsky-Korsakov studied music, had piano lessons, and attended opera performances and concerts as much as he could. He was deeply impressed by the nationalist works of Glinka, and after meeting Balakirev, who also was to be a profound influence, he started to study music seriously and became a member of the famous 'Mighty Handful', a group consisting of Balakirev, Rimsky-Korsakov, Moussorgsky, Borodin, and Cui. His assiduous studies and the resulting knowledge of counterpoint and instrumentation led to his appointment in 1871 as professor of composition at the St. Petersburg Conservatory.

It is sometimes said that Rimsky-Korsakov was less talented and less original than his colleagues in the nationalist school. This is unjust and unfair, as he excelled them all in the art of concise and colourful orchestration, as well as in the wealth of wonderful tunes springing up all over his works. His music now epitomizes the splendour, brilliance and pageantry of Tsarist Russia. His most distinguished pupils were Glazunov and Stravinsky, and Rimsky's influence shines through in their compositions, most markedly in the young Stravinsky's suite The Firebird.

Rimsky's major works include a number of colourful operas like Sadko, Mlada, The Maid of Pskov, Christmas Eve, The Golden Cockerel, The Tale of Tsar Saltan, and The Tale of the Invisible City of Kitezh. Orchestral works include three symphonies, the famous suite Sheherazade, the Capriccio Espagnol and the Russian Easter Festival Ouverture.

Regrettably, Rimsky-Korsakov composed only a handful of piano works,&nbsp;none of which of any importance, although he was a good pianist and showed with his Piano Concerto that he could write well for the intrument. To pianists, his name will probably forever be linked with to the famous Flight of the Bumblebee (from the opera The Tale of Tsar Saltan) which was so magnificently transcribed by Rachmaninov.