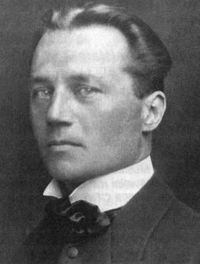 Ture Rangström (1884-1947) belonged to a new generation of Swedish composers who in the first decade of the 20th century introduced modernism to their compositions. Rangström was also a music critic, teacher, and conductor, mainly on a freelance basis. His works seldom use counterpoint or polyphony, and build on intensely personal expressionistic idioms with large-scale contrasts and harmonies that could classify him more as a very late superduper romantic than a modernist. He was quite controversial in his time. Sibelius thought highly of him and today he is regarded as one of the greatest Swedish composers of his era. This is mainly due to his vocal works; he composed around 250 songs and contributed greatly to developing the modern Swedish vocal romance.

He composed very few works for piano solo, among them Mälarlegender (legends of lake Mälaren) from 1919. Strindberg, whom Rangström much admired, inspired them in the long poem Stadsresan. It tells the tale of an organist from the peaceful countryside travelling on a steamboat to the busy capital, in order to buy a new instrument, and coming back to perform for a stunned audience. The first of Rangströms pieces is labelled "Lento improvisato, quasi Notturno" and begins in total calm where, with some imagination, we can hear slow waves lapping against the shore. But a storm seems to be brewing and after some time the waves get violent indeed. Luckily they peter out and calm is restored.