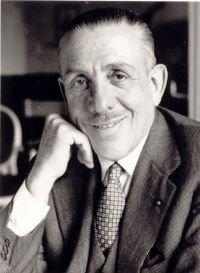 Francis Poulenc was born in Paris on January 7, 1899. He came from a wealthy family where musical soirees at home were a regular occurrence, as his mother was an amateur pianist and piano teacher. She gave Francis his first piano lessons which lead him in becoming a fine pianist, himself.

Poulenc became part of the group know as Les Six or Le Groupe des Six. The name was borrowed from the Russian Five. And although each of the six (Poulenc, Milhaud, Auric, Honegger, Tailleferre, and Durey) was dedicated to turning music away from Impressionism and formality, they insisted they were simply a group of friends with no communal musical aims.

Poulencs music is direct and tuneful, (his major strength) combining witty or ironic with sentimental or melancholy. And he used conventional harmonies (sometimes spiky chords) in such unique ways that produced fresh and appealing melodies consisting of bright colors and clear rhythm.

Without any lessons on composition, Poulenc gained success as a composer by the time he was 18 years old. In 1918, he served in the military and composed one of his most popular piano pieces, Trois Mouvements Perpétuels. During this time he also wrote the Sonata for Piano Duet, and the Sonata for Two Clarinets. Poulenc borrows much of his musical ideas from established composers, all the way from Mozart to Stravinsky, (hes also greatly influenced by Satie) but the later piece was highly original and got the attention of Bartok. Up until 1921, Poulencs compositions were short pieces. Bartok mentioned that he would be interested in seeing longer pieces of Poulencs, which in turn spurred him to seek out formal composition instruction.

Poulenc wrote many chamber pieces, and from 1926 on, every chamber piece included piano. Popular chamber pieces are his Sonatas written for woodwinds. In the 1930s, Poulenc, normally a convivial-natured man, suffered through several disastrous love affairs (mostly with men  although he did father a daughter), and the sudden death of a friend brought him back to the Catholic Church. It was then that he composed a great deal of powerful religious works, including the masterful Organ Concerto.

Poulenc is also known for his vast output of choral music, and especially French art songs. He masterfully set words to lyrical melodies that few could ever match. In addition, he wrote three operas. As to his place in modern music, he once wrote in a letter, I know perfectly well that Im not one of those composers who have made harmonic innovations like Stravinsky, Ravel or Debussy, but I think theres room for new music which doesnt mind using other peoples chords. Wasnt that the case with Mozart  Schubert?