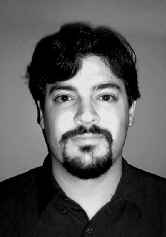 Carter Pann (b.1972) began studying piano at an early age with his grandmother and at 15 began lessons with Emilio Del Rosario at the North Shore School of Music in Illinois. In 1994 he received a Bachelor's degree from The Eastman School of Music. Pann earned his Master and Doctoral degrees from the University of Michigan where he studied with William Bolcom and William Albright.

Honors include the K. Serocki Competition award for his Piano Concerto, first prizes in the Zoltan Kodaly and Francois d'Albert Concours Internationales de Composition, a Charles Ives Scholarship from the Academy of Arts and Letters, and many awards from ASCAP. His composition Slalom was a finalist in the 2001 Masterprize competition and winner of the Haddonfield Symphony's Young Composers' Competition. His Piano Concerto was nominated for a Grammy Award in the "Best Classical Composition of the Year" category for 2000.

The Czech State Philharmonic of Brno has recorded four of his orchestra works under Jose Serebrier for the Naxos American Classical series. His clarinet concerto Rags To Richard, commissioned for Richard Stoltzman, has been recorded by Mr. Stoltzman with the Seattle Symphony under Gerard Schwarz. The wind version of Slalom was recorded and released in 2006 on the Naxos label as part of the album Redline Tango.

Read more about Carter Pann on his homepage at http://carterpann.com/.