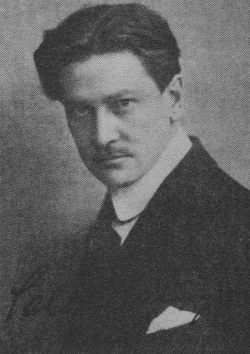 Selim Palmgren, Finnish composer and pianist, was born in Pori in 1878. At age 20 he travelled to Berlin to study with Conrad Ansorge (a pupil of Liszt) and to Weimar where he took a masterclass with Ferrucio Busoni. he premiere of Palmgren's first Piano Concerto in 1904, with the composer as soloist, was a huge success which secured his successful career. Generally during his lifetime, his compositions and performances were met with acclaim, which was partly due to his being married to, and performing with, the internationally renowned soprano Maikki Järnefelt. When his wife died in 1929 he married the soprano Minna Talwik. During a concert tour of the USA in 1919 he was offered a professorship in composition at the Eastman School of Music in Rochester, NY. Palmgren held this post (which had been offered earlier to Sibelius, who had declined) from 1921 to 1926. From 1939 until his death in 1951, Palmgren was Professor of Composition at the Sibelius Academy in Helsinki.
As a composer, Palmgren was rooted firmly in the late Romantic tradition, his piano works taking their clue from Schumann and Chopin, but he was also the first Finnish composer to make use of Impressionist elements. In a time where the Finnish music scene was heavily dominated by Jean Sibelius, who was only 13 years older than Palmgren, he was often dubbed Sibelius' "crown prince" and "heir apparent". On account of his splendid pianism, he was also sometimes called the "Chopin of the North". Surely these claims are somewhat off the mark, as he possessed neither the innovative talent of Sibelius nor the pianistic genius of Chopin. At best, Palmgren was a skilled composer who produced tuneful and attractive, if not always very individual and innovative, music. For all his craftmanship, this lack of individualism has caused a steady decline in popularity since his death.
Palmgrens oeuvre consists mainly of piano works (character pieces, Etudes, Preludes, and a Sonata), chamber music and songs. Quite possibly daunted by the symphonic output of Sibelius, he composed no symphonies or any other significant works for orchestra. His five piano concertos, which used to be quite popular during his lifetime, are big-boned romantic works in the style of Liszt and Rachmaninov (it is sometimes snidely remarked that it was Palmgren's luck that Sibelius had so little affinity with the piano). His only opera Daniel Hjort, on a libretto written by himself, was premiered in 1938.