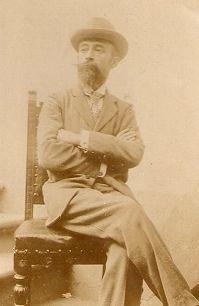 Though considered a Brazilian composer, Oswald was of European stock and spent the better part of his life in Europe, his music fitting perfectly into the Franco-German Romantic tradition. He was born in Rio de Janeiro in 1852, the son of a Swiss-German father (originally Oshwald) and of a mother from Livorno, Tuscany. Both were musicians, his mother being the childs first teacher.

Around 1853 his father went to Sao Paulo, initially to sell beer, being later joined by his wife and child. The latter traveled in a ship that was transporting gunpowder. Halfway through the journey, a fire breaking out on board, all passengers were evacuated to a nearby island. The explosions were to remain etched in Henriques memory for the rest of his life.

The father switched in 1857 to pianos instead. These were to become the childs toys and by the age of six he was already giving concerts. Realizing their sons future lay in music and that Brazil could not offer him a proper musical education, his parents decided he continue his studies in Europe. Accordingly he left Brazil, together with his mother in 1868, being joined by the father some time later. The original plan had been to entrust the child to Hans von Bülow, but they decided to settle in Florence, at the time capital of Italy. While still studying he was to make the acquaintance of Liszt. In 1881 he married an Italian singer and settled into the career of a teacher at a Florentine musical institute. In 1896 he went to Brazil on tour, being very well received by the critics, an event that encouraged him to return many other times. In 1889 he had the opportunity to play with Saint-Saëns, who at the time was also in Brazil.

In 1900 he was nominated Brazilian Chancellor at The Hague, being soon after transferred to Florence. In 1902 the French newspaper Le Figaro organized a composition competition which was won by Oswalds Il Neige! (It Is Snowing!). The jury included Fauré and Saint-Saëns. In 1903 Oswald returned to Brazil, being nominated director of the Instituto Nacional de Música by the Brazilian president. No born administrator and feeling he could no longer compose, he resigned after three years, but remained active as a teacher, while still retuning regularly to Europe. In 1911, the year of his sixtieth birthday, he and his family settled in Rio de Janeiro. For the next twenty years he taught, while his house became an important musical centre for chamber music.

He was to maintain friendships with Rebikov - director of the Moscow Conservatoire - as well as with Arthur Rubinstein, Milhaud  who was for a time in Brazil as a member of the French diplomatic corps - Claudel, Moszkowski, Pierné and Isidor Philipp. He played host to Respighi when the latter visited Brazil on honeymoon. His son Alfredos - a pianist, composer (and, following a stroke which paralyzed his left side, one of the few composers to write music for the right hand) and performer of his fathers work in the United States  taking religious orders spurred Oswald to compose music for the Church.

Just days before his death he was awarded the Legion dHonneur by the French government, a decoration he received posthumously.

Oswald composed mostly for the piano, but besides a symphony and two concerti, one for piano and one for violin, he wrote three operas, copious and high quality chamber music and a cappella choral works of rare loveliness. More information (in Portuguese) on the composer can be found at: http://www.oswald.com.br/site2010/hoswald1.htm