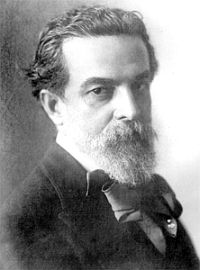 Though later overshadowed by Heitor Villa Lobos, Alberto Nepomuceno was the founder of the Brazilian national school.

He was born in Fortaleza, capital of the north-eastern state of Ceará, in Brazil. He began his musical studies with his father, a violinist and organist at the Fortaleza Cathedral. In 1872 his family moved to Recife, the capital of Pernambuco, where he continued his studies with his father until the latters death in 1880. In 1882 he became the director of the Recife Carlos Gomes Club and the following year was active as a violinist at the Santa Isabel Theatre. In 1884 he returned to Ceará and in 1885 moved to Rio de Janeiro, where he was active as a pianist at the Beethoven Club and formed a duo with the cellist Frederico Nascimento. In 1886 he took up his duties as teacher at the Beethoven Club while still learning harmony. In 1888 he played his Dança de Negros (Negro Dance) at the Iracema Club in Fortaleza, a piece with local colour that was later re-elaborated, orchestrated and renamed Batuque, becoming the fourth and last movement of the Série Brasileira.

In August of the same year he left for Rome to further his studies, thanks to an official award given him by the Brazilian government. He enrolled at the Accademia di Santa Cecilia and in 1890 moved to Berlin, entering the Akademische Meister Schulle. He then transferred to the Stern Conservatoire, graduating in 1894 with a concert by the Berlin Philharmonic, where he conducted his Scherzo for Orchestra and his Suite Antiga for strings.

It was in Berlin in 1891 that he met Walborg Rendtler Bang, a pupil of Edvard Grieg, whom he married two years later in Christiania (Oslo). The couple stayed for a while in Troldhaugen, Griegs country house. Grieg was to prove a major influence both musically and as a model for Nepomucenos establishing of a Brazilian national school. His Suite Antiga (Suite in the Ancient Style), which he wrote in Troldhaugen in 1893, is clearly fashioned after Griegs Suite from Holbergs Time. Grieg enjoyed the work so much that he insisted that it be published by his own publisher, Peters. Another work from his Berlin period, the String Quartet No.3, written in 1890 and subtitled Brazilian, is one of the earliest attempts to weave Brazilian folklore into a work cast in classical forms. The same year he wrote his Piano Sonata in f minor, the first work in this form to be written by a Brazilian, in which his fondness for Brahms is evident.

In 1894 he travelled to Paris to study the organ at the Schola Cantorum, where he met Saint-Saëns and DIndy. The following year the couple was back in Brazil, and he became organ teacher at the Instituto Nacional de Música in Rio de Janeiro. Between 1896 and 1906 he was active at the Popular Concert Association, promoting Brazilian composers. Considering that at the time Portuguese was not thought appropriate for opera or art song, it took some courage on his part to present a series of songs written in the vernacular at the Instituto Nacional, and he was much criticised for this.
In 1900 he met Mahler in Vienna and discussed the staging of his opera Arthemis, but nothing came of this. In 1910 he conducted concerts of Brazilian music, including some of his compositions, in Brussels, Geneva and Paris. It was in the latter city that he met and befriended Debussy. In 1913 his opera Abul was staged in Rome.

One of Walborg and Albertos daughters, Sigrid, was born with only a left hand. It was for her he wrote two sets of pieces: the 1906 Five Small Pieces, which were premièred by her at a school concert in 1907, and two nocturnes, which she played in concert in 1919.

He resigned his position at the Instituto Nacional de Música in 1916, devoting the last fours years of his life to composition and to promoting younger composers, including Villa-Lobos. In 1920 the overture to his unfinished opera O Guarujá was presented by the Vienna Philharmonic conducted by Richard Strauss. Besides the works mentioned above, he wrote a Symphony in g minor, a romantic work, as well as a serenade for strings, in the ancient style but with Brazilian elements.