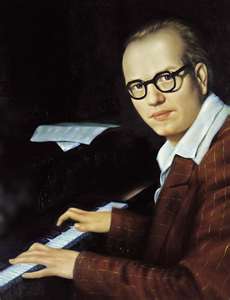 Olivier Messiaen was born in Avignon, France and studied organ and composition in Paris. In 1942, he was on faculty at the Paris Conservatory, as a professor of harmony. Two of his most famous students were Boulez and Stockhausen. Messiaen was not a founder of any school of compositional style or technique. He tried to influence his students to expand their imagination and talents in order to find their own way of communicating their creative expressions. Messiaen integrated elements of mysticism, impressionism and romanticism. His compositional life could be categorized into four distinct periods. Until 1948, Messiaen was strictly neoclassical, as is demonstrated in his organ works completed in the 1930's and the Turangalila Symphony (1948). By 1948, he was one of the first composers to begin experimentation with total serialism. The 1950's became known as Messiaen's Bird Period, for he was very interested in cataloguing bird calls from around the world. The 1960's brought simpler structures and textures to Messiaen's music. This period could be classified as his Assessable Period, since his music was easier to understand to the listener. Like Mahler, Messiaen became a devout Roman Catholic, and believed that composing music was an act of faith. Messiaen worked with rich homophonic textures and employed harmonic and melodic material from a variety of sources, among them the plainchant modes, octatonic scales, pitch sets and conventional harmony.