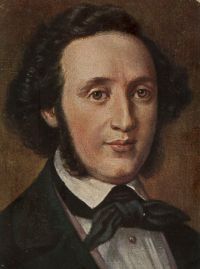 Felix Mendelssohn was born into a wealthy Hamburg family, studied the piano with his mother at an early age, and later took formal instruction on the piano from Carl Zelter in Berlin. When still only a child, he began to compose chamber works - his family often held chamber soirées in their home, and young Felix had ample opportunity to hone his craft on these impromptu ensembles. Soon he was composing trios, quartets and operettas, and was making his mark as a pianist; his public debut on the keyboard came at the age of nine. By the time Mendelssohn was seventeen, his fame as a musical prodigy was spreading; that year, his first great composition - the overture to Shakespeare's A Midsummer Night's Dream - was produced.

At twenty, Mendelssohn still had not created most of the works that would assure his place as one of the leading lights in classical music lore (except the profoundly brilliant Octet for Strings, written in 1825); he did, however, demonstrate his keen musical sensibilities in another way - the championing of the music of Johann Sebastian Bach. In the 80-odd years between Bach's death and Mendelssohn's revival of Bach's music, the old Baroque master had gone unnoticed, his music almost forgotten entirely. Mendelssohn, noting this lapse in popular judgment, set about to make things right, and in 1839 he conducted a full-scale performance of Bach's crowning achievement, the St. Matthew Passion. The performance was a smashing success, and it began a re-evaluation and appreciation of Bach's music that continues unabated to this day.

In 1833, Mendelssohn he applied for a faculty job at a prominent music school in Berlin, but was turned down. Later that year, however, he was appointed Music Director of the town of Düsseldorf; two years after that, he was offered the conductor's post by Leipzig's legendary Gewandhaus Orchestra. By this point, he had already begun to write symphonies, more chamber works, and one of his piano concertos, as well as one magnificent oratorio, St. Paul (1836). Ensuing career developments included a post at Berlin's Academy of the Arts and the origination of the Leipzig Conservatory in 1843. More works - the last symphonies, the Violin Concerto, the Wedding March - rolled from his pen before his health began to decline in 1846. Compounded by the death of his beloved sister, Mendelssohn's depression and decline proceeded until the next year, when he died at the tender age of 38.