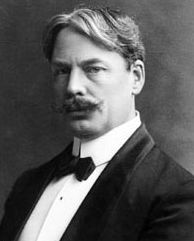 Edward MacDowell was born in 1860 in New York, of Scottish-Irish descent. He commenced piano studies at age eight, sometimes assisted by family friend Teresa Carreno, the great Venezuelan virtuoso. At age fifteen he was sent to the Paris Conservatoire where he made the acquaintance of fellow student Claude Debussy, but he soon moved on to the Hoch Conservatory in Frankfurt where he studied piano with Carl Heymann and composition with Joachim Raff. MacDowell remained in Germany, composing and teaching piano at the Darmstadt Conservatory and in Wiesbaden until 1888, when he returned to the USA. During his years of residence in Germany he earned the admiration of Liszt, Joachim and other noted European musicians. These accolades stood him in good stead upon his return home. He settled first in Boston and toured as a concert pianist, performing his own and others' works until becoming first professor of music at Columbia University in New York City in 1896, a position he held until 1904. Also in 1896 he purchased a farm near Peterborough New Hampshire, where he spent the summers composing. Like his contemporary Mahler, MacDowell's academic responsibilities only allowed him to concentrate on composing in the summer vacation . During these years he became the most prominent American composer, known for such works as his two piano concerti, the four piano sonatas Tragica, Eroica, Norse and Keltic, the Indian Suite and Sea Pieces for orchestra, much choral music, and numerous songs. Most enduringly popular however remain his several sets of piano miniatures such as the Woodland Sketches and New England Idylls, inspired by the New England countryside around Peterborough where he spent his happiest days composing and enjoying the company of his wife Marian, a former student four years his elder whom he had married in1884.

Starting in 1903, MacDowell frequently clashed with the new President of Columbia University, Nicholas Murray Butler over the role that the arts should have in education. The dispute led to MacDowells resignation in 1904, and the feud between the two was the subject of much press coverage. The stress of this episode, combined with injuries suffered in a traffic accident around this time led to a mental breakdown followed by degenerative paralysis. MacDowell spent his last years at his beloved farm Hillcrest in Peterborough and died in New York in 1908.

Before he died he was able to see his final dream come to light, the establishment of an artists colony at Hillcrest, where artists of all kinds could come and work on their projects in peace and quiet, away from the distractions of the outside world. Since the founding of the MacDowell Colony at Hillcrest in 1907 such artistic luminaries as Aaron Copland, Thornton Wilder, Edward Arlington Robinson, Amy Beach, Doris Grumbach, Louise Talma, Roy Harris and Leonard Bernstein have resided there to work and reflect.

MacDowells star set soon after his death. The composer who had been the idol of pre-WWI America seemed old fashioned and Victorian only fifteen years after his death, as music quickly moved into the realms of expressionism and atonality, concepts far removed from the rustic romanticism of MacDowells music. MacDowell perhaps embarrassed many modern American composers, who saw in him a sentimental Victorian salon composer far removed from the modernistic world of steel and skyscrapers that they embraced. But while much of his music lapsed into obscurity, some works have remained in the repertoire - the Woodland Sketches are popular with many amateur pianists, and the big-boned Second Piano Concerto is a favourite of many a virtuoso concert pianist. In recent years there has been renewed interest in and performance of his other piano works, and we can hope that his entire piano oeuvre may be entering the piano repertoire once again.