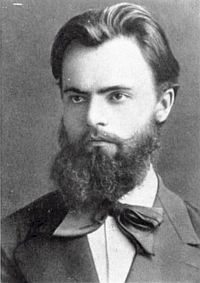 Sergei Liapounov was born into a gifted family in the town of Yaroslavl, one hundred and sixty miles northeast of Moscow. His father was an astronomer and his mother a talented amateur pianist. His older brother Alexander became a famous mathematician, whilst his younger brother Boris became a philologist and member of the Russian Academy of Sciences.

After the death of Liapounov's father in 1868, the family moved to Nizhny Novgorod, where Liapounov joined the local branch of the Russian Musical Society. On the recommendation of Nikolai Rubinstein, he enrolled in the Moscow Conservatory of Music in 1878, where his piano teachers included Karl Klindworth and Paul Pabst, and he received lessons in composition from Sergei Taneyev. Liapounov had already shown an interest in the music of Mily Balakirev and his circle (commonly known as "The Five" or "The Mighty Handful") and, upon graduating with honours in 1883, he turned down the offer of a teaching post at the Moscow Conservatoire in order to move to St. Petersburg, where Balakirev lived.

In 1893, Liapounov, Balakirev and Liadov were commissioned by the Imperial Geographical Society to research and collect folksongs from northern Russia. Liapounov arranged many of these songs for piano and voice and folksong material is also worked into much of his output.

Liapounov succeeded Rimsky-Korsakov as assistant director of music at the Imperial Chapel, and became a professor at the St Petersburg Conservatory in 1911. After the Russian Revolution of 1917, he emigrated to Paris, becoming director of a school of music for Russian emigrés. He died of a heart attack in Paris in 1924.

Liapounov also had a successful career as a pianist and conductor, making several tours of Western Europe. He additionally recorded some of his own compositions on the Welte-Mignon reproducing piano.