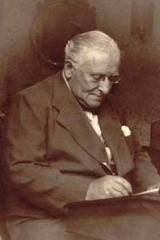 Albert William Ketèlbey, English composer, conductor and pianist, was born in 1875 Birmingham, England, as the son of George Ketelbey (written without accent), and Sarah Aston. His early piano sonata (written at age eleven) won the praise of no less than Edward Elgar. Albert attended the Trinity College of Music in London. His talent for playing various orchestral instruments is reflected in his masterfully colourful orchestrations, often with of oriental inspiration, that became his trademark. For some of his earlier works, Ketèlbey used the pseudonyms Raoul Clifford and Anton Vodorinski, which gave cause to some textbooks stating Vodorinski as his true name and Ketèlbey as the pseudonym.

After having been appointed musical director of London's Vaudeville Theatre, Ketèlbey continued writing various vocal and instrumental music. He became especially famous for composing lightweight, popular music, often used as accompaniment to silent films, or for mood music at tea dances. The huge success of some these pieces, like "In a Monastery Garden" and "At a Persian Market", enabled him to live independenly, and he is often cited as England's first millionaire composer. Based on the number of performances of his works, he was proclaimed "Britains greatest living composer" in 1929. His "Bells across the Meadows" was voted no.36 in a poll of most popular English tunes.

In addition to composing and performing, Ketèlbey has held posts as music editor to some well-known publishing houses, and as the Musical Director of the Columbia Graphophone Company. He died in 1959 at his home, Egypt Hill, in Cowes, where he had moved in order to concentrate on writing and his hobby of playing billiards.