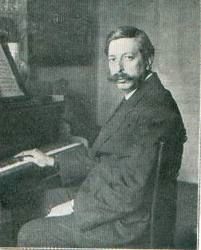 Enrique Granados y Campiña, Spanish composer and pianist, was born in 1867 in the Catalan town of Lérida, the son of an army officer born in Havana, Cuba. At an early age the family moved to Barcelona where he studied the piano with Juan Pujol (himself a pupil of a pupil of Liszt, and the teacher of Albéniz and Ricardo Viñes among others). After winning a first prize for piano playing, he studied composition with the renowned musicologist Felipe Pedrell, the man who inspired Granados, Albéniz and Falla to take their clue from native Spanish music. In 1887 Granados moved to Paris where he studied with Charles de Beriot and got in touch with the important French composers like Fauré, Debussy, Ravel, and in particular Camille Saint-Saëns with whom he became close friends. After completing his studies, he returned to Barcelona to begin a career as composer and virtuoso pianist, in 1892 giving the first Spanish performance of the Grieg piano concerto. His first success as a composer came with the 12 Spanish Dances of 1890, a set that has become one of his most popular works.

In 1901, together with Pedrell, he founded the Granados Academy, a school for teaching the art of piano playing. The academy was later taken over by, and renamed after, his most famous pupil Frank Marshall (a teacher of Alicia de Larrocha).

In 1911 Granados premiered his piano suite Goyescas. This famous cycle of six pieces is inspired by the 18th century majas as depicted by the painter Goya. Such was the success of Goyescas that Granados in 1914 wrote an opera on the same subject, recycling part of the music. Due to the outbreak of World War I, the opera was not premiered in London as planned, but in New York. After an unexpected invitation to play for President Woodrow Wilson at the White House, he had to change his return schedule and travel on several ships to get home. The British liner Sussex, that was to take him from Liverpool to Dieppe, was torpedoed in the English Channel by a German submarine. Granados (who had a pathological fear of water all his life) drowned in a heroic attempt to save his wife Amparo. Thus in 1916 one of the greatest Spanish composers, being at the peak of his powers, became a tragic victim of war.

Although Granados is often mentioned in one breath with Albéniz and Falla, he was more a neo-romantic than a nationalistic composer, writing elegant, brilliant and expressive music influenced by Chopin, Schumann, and Spanish history. His main works are the operas Maria del Carmen (1898) and Goyescas (1916), the symphonic poem Dante (1908), the maja-inspired song cycle Tonadillas (1910), and chamber music.

Among his numerous piano works, Goyescas (1911) is one of the twin peaks of Spanish piano music (the other one being Albéniz' suite Iberia). The glittering El Pelele is sometimes considered as a seventh part of Goyescas. Equally popular are the 12 Spanish Dances (1890), from which the Andaluza has been transcribed for guitar and violin/piano. In the same vein are the 6 Piezas sobre cantos populares españoles. The Allegro the Concierto (1903) is a brilliant virtuoso showpiece. On a smaller scale we find poetic miniatures like the Escenas Romanticas (1903), the Valsas Poeticos, Bocetos, and Danza Lenta.