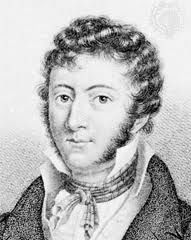 ogether with Clementi, Field traveled to Paris, Vienna, and St. Petersburg where he was was introduced to his first important Russian patron, General Marklovsky. After great successes in St. Petersburg and other Russian cities, Field settled in St Petersburg and married one of his pupils, Adelaide Percheron. He fathered a ligitimate as well as an illegitimate son. In the next few years, Field enjoyed great success as a teacher and composer (Mikhail Glinka was one of his pupils). In 1821, Field moved to Moscow where he continued to perform, but, due to an increasing alcohol addiction, would produce no significant compositions for the next decade (he got to be nicknamed Drunken John).

n 1831, Field was diagnosed with rectal cancer. He returned to London where he underwent a partially successful operation. After recovery, the musical establishment welcomed him, and he performed several concerts in London and Manchester. While in England, Field met Felix Mendelssohn and Moscheles, who spoke of his "enchanting legato, his tenderness and elegance, and his beautiful touch." However, his reception by the musical public was less enthusiastic. Field then traveled to Paris where his reception was again mixed. On December 25, 1832, he performed his last major work, the Piano Concerto No. 7 at the Salle du Conservatoire. In Paris, Field heard Liszt play, and (bewildered by Liszt's pyrotechnics) asked his neighbor, "Does he bite?"

In 1833, Field toured Europe as a pianist, but the spring of 1834 he was too ill to play in public anymore. After a number of surgeries and several months in hospital, he was brought back to Moscow due to the help of a family of Russians. He recovered sufficiently and gave three concerts in Vienna, where he was briefly the guest of Carl Czerny. Returning to Moscow in September of 1835 he lived another sixteen months before his death on January 11, 1837.

Field wrote a significant amount of music for piano solo or piano in combination with other instruments, including seven piano concertos, but he is best known for his creation of the Nocturne as a genre. Apart from the Nocturnes, which were a seminal influence on Chopin, he wrote sonatas, marches, variations, and other piano works.

Although Fields popularity declined in the last half of the nineteenth century, interest in his music has resurfaced in recent times. This is evident in the many recordings of his works, not only the Nocturnes, but also all of the Concertos and the many Variations. Musicians have largely adopted the view that John Field was a true pioneer of Romanticism.

- Monica Hart (more on the author)