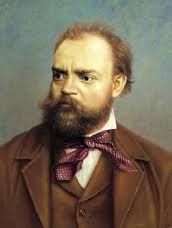 Antonín Dvorak was born on September 8, 1841 in Nelahozeves, near Prague where he spent most of his life. His father was a butcher, innkeeper, and professional player of the zither (string instrument, mainly used in folk music). Dvorak's parents recognized his musical talent early, and he received his earliest musical education at the village school which he entered in 1847.

Dvorak studied with Antonin Liehmann and at the Prague Organ School (1857-1859). As he was a capable viola player, Dvorak joined the band that became the nucleus of the new Provisional Theatre orchestra, conducted from 1866 by Smetana. Private teaching and mainly composing occupied him from 1873 and forward and he won the Austrian State Stipendium three times (1874, 1876-1877), gaining the attention of Brahms, who secured the publisher Simrock for some of his works in 1878. Foreign performances multiplied, notably of the Slavonic Dances, the Sixth Symphony and the Stabat mater, and with them further commissions. These were particularly well received in England and Dvorak wrote The Spectre's Bride (1884) and the Requiem Mass (1890) for Birmingham, the Seventh Symphony for the Philharmonic Society (1885) and St. Ludmilla for Leeds (1886), besides receiving an honorary doctorate from Cambridge.

Dvorak visited Russia in 1890, continued to launch new works in Prague and London and began teaching at the Prague Conservatory in 1891 (where Joseph Suk was among his most gifted pupils). Before leaving for the USA he toured Bohemia playing the new Dumky Trio. As director of the National Conservatory in New York (1892-1895) he taught composition, meanwhile producing the wellknown Ninth Symphony ("From the New World"), the String Quartet in F, the String Quintet in E-flat and the Cello Concerto. Financial strain and family ties took him back to Prague, where he began to write symphonic poems and finally had his efforts at dramatic music rewarded with the success of the fairytale opera Rusalka (1901). The recipient of honours and awards from all sides, he remained a modest man of simple tastes, loyal to his Czech nationality.

In matters of style Dvorak was neither conservative nor radical. His works display the influences of folk music, mainly Czech (furiant and dumky dance traits, polka rhythms, immediate repetition of an initial bar) but also ones that might equally be seen as American (pentatonic themes, flattened 7ths); Classical composers whom he admired, including Mozart, Haydn , Beethoven  and Schubert . Wagner , whose harmony and use of leitmotifs attracted him and his close friend Brahsm  (notably his piano writing and mastery of symphonic form). Despite his fascination with opera, he lacked a natural instinct for drama and for all their admirable wit and lyricism and by general, his last five stage works rank lower than his finest instrumental music. Here his predilection for classical procedures reached its highest level of achievement, notably in the epic Seventh Symphony, the most closely argued of his orchestral works and the Cello Concerto, the crowning item in that instrument's repertory, with its characteristic richness and eloquence, as well as in the popular and appealing Ninth Symphony and the colourful Slavonic Dances and Slavonic Rhapsodies. Among his chamber works, landmarks are the String Sextet in A op.48, a work in his national style which attracted particular attention abroad and the f Minor Piano Trio op.65, one of the climaxes of the more serious, classically 'Brahmsian' side of his output. Among other interesting works are the string quartets, notably the popular "American" op.96, with its pentatonic leanings, and the two late works, the deeply felt op.106 in G and the warm and satisfying op.105 in A-flat.