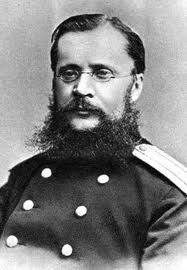 Cesar Cui (1835 - 1918) was a Russian composer and critic of French and Lithuanian descent. Despite being a prolific composer, his chief claim to fame is being a founding member the the "Mighty Five", the group of Russian nationalistic composers who first gathered, together with the critic V.I.Stassov, in St.Petersburg in 1856 (although Borodin joined as late as 1862).

Like the other members of the "Mighty Handful" (Mily Balakirev, Modest Moussorgsky, Alexander Borodin.and Nikolai Rimsky-Korsakov), Cui was a largely self-taught amateur composer. Like Rimsky-Korsakov, who was a naval officer, Cui made a successful military career. As an instructor in military fortifications, he counted Tsar Nicholas II under his pupils, and he eventually gained the title of professor and the rank of general.

Cui's many compositions have not gained significant foothold in the repertoire. This is partly because his voice was not as original and nationalistic as that of his collegues, and partly because of his attitude as a critic. In his often sarcastic reviews he lambasted works by Tchaikovsky and Rachmaninov, and did not spare even his close collegues and friends. While initially progressive (at least in name), in later years Cui became an arch-conservative, showing open hostility against the newer trends in music such as was composed by Richard Strauss and Vincent d'Indy. A year before his death he became blind and could only compose small pieces via dictation.

Cui's large legacy includes numerous writings on music and military fortifications, and compositions in every genre except for symphonies and symphonic poems. He composed 15 operas and completed two others (The Stone Guest by Dargomyzhsky and The Sorochynsky Fair by Moussorgsky), choral and vocal works, and a large body of piano music.