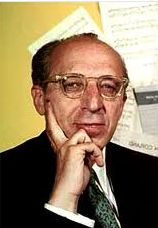 Aaron Copland, American composer, was born in 1900 in New York. He was taught to play the piano by his elder sister, and when he was 15 years old he decided he wanted to be a composer. In 1921 he went to Paris to study with the famous teacher Nadia Boulanger, and during his 3 years in Paris he was at the forefront of the mucical avant-garde. After his return to the United States he produced his first major work, the Symphony for Organ and Orchestra which was first performed at Carnegie Hall in 1925.

Copland, like Bach, assimilated all the important musical trends of his lifetime. Jazz, Stravinsky's neoclassicism, American folklore, and finally Schoenberg's 12-tone system, all made their imprint on his music, and yet his style remained unique, personal, and instantly recognizeable. He stopped composing in 1970, but continued conducting and lecturing for more than 10 years, as well as promoting modern American works and establishing the composition department at Tanglewood. He died in 1990 in the Phelps Memorial Hospital in Tarrytown (New York).

Copland is rightly considered the most important American composer of the mid 20th century. He produced masterpieces in most musical genres. His most enduringly popular works are those of his 'Americana' period : Rodeo, Billy the Kid, Appalachian Spring, Danzon Cubano, El Salon Mexico, the film scores Our Town and The Red Pony, and the incidental music for Irwin Shaw's play Quiet City. The 'Fanfare for the Common Man' from his imposing Third Symphony has become an icon of American music, played at countless celebratory occasions. His concerti include a Piano Concerto and a Clarinet Concerto written for Benny Goodman. He also left a sizable body of chamber music, songs, and piano music.

His piano works span the better part of his career. Between the early frolic of The Cat and the Mouse (1920) to the serial 10-tone Piano Fantasy (1957), we find these major landmark works : Passacaglia (1922), Piano Variations (1930), Sonata (1941), and the ever popular Four Piano Blues (1948), all of which are among the most important American piano works of the time.