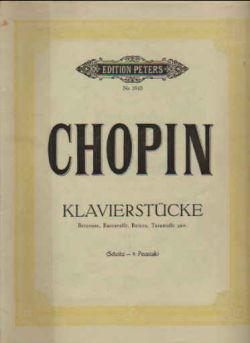 Among Chopin's miscellaneous works, mention should be made of the Variations brillantes Op.12 (sur le Rondeau Favori: "Je vends de Scapulaires" de Ludovici), which shows how Chopin applied his art to the then popular custom of composing variations on opera themes. Arthur Loesser called it "a masterpiece in its way".

A Bolero in C major, Op. 19, dates from 1833. Chopin turns this Spanish form into a rather Polish-sounding affair. The Tarantelle in A-flat, Op. 43, has spirit, though it lacks the native frenzy of the dance. In the Introduction and Rondo in E-flat, Op. 16, a Weber-like opening leads to a brilliant and engaging rondo, which is overly long. Perhaps more characteristic is the 1827 Rondo a la mazur, Op. 5, with its florid passages exuding a Slavic flavor.

The Fantaisie in F minor Op.49 is one of Chopin's undisputed masterpieces, and one of his most challenging works technically as well as musically. After a slow, funeral march-like introduction follows a three-part structure, loosely combining rondo and sonata format. The main theme occurs three times, each in different tonality and mood. The fiery, heaven-storming outer movements flank a Lento Sostenuto of unusual poignancy, where Chopin seems to write one of his deepest confessions. The final bars of the work, in A flat major, are a ravishing flight into nirvana, and arguably are some of the most beautiful and uplifting ones ever written by the  poet of the piano.