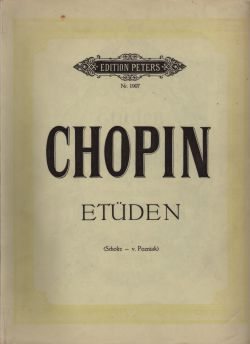 Chopin is the true inventor and patron of the "étude de concert" and what separates Chopin's Etudes from similar compositions is that it was Chopin who first gave etudes complete artistic form in which musical substance goes hand in hand with technical challenge.

The creative stimulus for Chopin's etudes is the individually shaped hand, with its arrangement of muscles and tendons. In essence, it is the mechanical difficulty that directly produces the music, its charm and its pathos.

Complete set of Op.10 & Op.25 on an historical instrument

What would the Chopin etudes sound on a piano from the time of Chopin? We might never know the true answer but Martha Goldstein gives us at least a clue when she recorded the complete set of Chopin's Etudes on an Erard from 1851. First, some words about the piano.

The invention of the double escapement mechanism of Sebastian Erard in 1822 transformed the technical capabilities of the Beethoven piano to make it a Chopin piano. The Etudes of Chopin were now possible because of this increase in performance. These early pianos sound different than the modern grand. They were designed for low string tension, with light strings, light bridge, and thin sound board. As a result, the produced tone is explosive and decays rapidly. The fast decay gives these pianos a special character. There is more clarity in fast passage-work than the modern grand. The early piano schools gave great emphasis to velocity, as it was a prerequisite for brilliance on these instruments.

The legato and sustaining powers of the instrument are limited compared to the modern grand. As a result slow movements were played faster, as attested by the metronome markings on the early editions of the Etudes. The pursuit of legato became a lifetime struggle for the pianist.

The Erard piano was famous during the Chopin era. Unhappily, the doors of Erard are now closed, the French being more inclined to support the visual arts rather than the musical ones. The contribution of the Erard family to the art of piano building is unsurpassed, as shown by references on the history of the piano.

The instrument used in this recording, Serial no. 22,657, was built in 1851 in Paris, 2 years after Chopin's death. It is approximately the size of a Steinway model B, but weighs only 450 lbs. about half the weight of the Steinway. The pitch stability of the instrument is poor - changing with the weather or vigorous playing. The fast decay, however, makes small tuning errors tolerable. The dynamical scale of the instrument is smaller than the modern grand. The greatest volume is less than half that of the model B. while the model B can be played considerably softer with reliability. For delicacy and clarity the Erard has the upper hand. The comparison is like that of a sports car to the touring sedan.

The piano was owned by Glenn D. White of Seattle. It was restored to playing condition by him with the assistance of Allen Goldstein. Minimal changes were made in the restoration so that the piano is in no sense modernized. The hammers and action are the original ones.