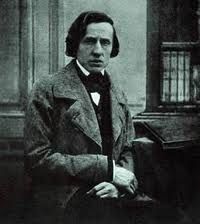 Chopin, Polish pianist and composer. Born in 1810 in Poland (Zelazowa Wola) and perhaps the greatest composer for piano ever. One can ask just about any person, musically interested or not, to name a piano composer and a majority will come up with the name Chopin.

Chopin grew up on the countryside outside of Warsaw as the only son among three children, he being the second oldest. The family was not rich but neither poor and music was always present as both parents were musically gifted. It is told that Chopin's mother was a decent piano player and his father could bring out spellbinding melodies. Altogether, with the exception of the tragic death his youngest sister at the age of 14, Chopin's childhood seems solid and happy.

As an infant, Chopin's parents were worried that he did not like music, as he easily started crying when music was played. However, it is now believed that the reason was rather the opposite - that music affected Chopin greatly even in very young years.

Chopin began seriously to play the piano at the age of 5, taught by his older sister Ludwika. His talent was immediately apparent, and the services of a piano teacher were subsequently enlisted in order to support his practise. This piano teacher was Zywny - a generous man and friend to the family. He was not a teacher of the strict disciplinary kind, which disciplined schooled teacher which - in the case of a briliant student like Chopin - only proved to be an advantage. At the age of 7, Chopin was already somewhat famous in Warsaw and made his first appearance for the Russian prince just before he turned 8. The very same year, Chopin's first compositions were published in a local Warsaw newspaper. Chopin was a highly dedicated student. It is even said that he - at the early age of 7 - slept by his own free will with wine-corks between his fingers in order to achieve a wider grip. He knew his destiny.

Chopin's abilities developed greatly during his young years and he was soon recognized a child prodigy - widly known not only in Poland but also by the Russians for whom he gave several recitals.

While Zywny brought him the most fundamental piano practise and encouraged his innative power to compose, Chopin soon needed a more skilled teacher to advance further. He was therefore directed to Josef Elsner. Elsner played a very important role in Chopin's development as a composer, and his influence on the musical world scene was highly valuable. It was at the Conservatory, studying under Elsner, that Chopin got in contact with, for example, John Field's Nocturnes, Bach's preludes and fugues, Clementi, Mozart, Beethoven etc. Elsner should be thanked for not trying to shape Chopin's unusual technique and ideas into a mainstream form of pianism, but rather letting the young genius explore all possibilities and forms of music through his own inventive abilities.

After the studies, Chopin went to Vienna, where he was recognised as a decent pianist with some nicely written compositions, but altogether, it was not the success he had hoped for. Thus, he went back to Warsaw and, subsequently, set his course for Paris.

In Paris, Chopin did not immediately achieve success. It took a couple of hard years of composing and performing before he had worked himself into the highest society where he gave lessons for royalties and could receive the highest gage for his compositions. Chopin became extremely famous and as one example, on the question of who was the best pianist of Kalkbrenner or Liszt, the joking answer, but with an underlying seriousness, was Chopin. So highly was he thought of not only as a composer or teacher but also as a pianist.

Chopin is often compared with people and especially with Liszt but it is a most irrelevant comparison. The very different characters played on different arenas and while the truly romantic Liszt toured as a virtuoso, spellbinding his audience with his extra ordinary capabilities and gave himself totally into the new world of free love, Chopin was composing, mostly Saloon music, gave piano lessons and was the noble gentleman of the old school.

Chopin was never to return to Poland again and made very few trips outside France, mainly because of his weak health. Among the most famous is the disastrous trip to Mallorca which almost got him killed and the trip to Scotland which was equally bad for his health.

Chopin was diagnosed with Tuberculosis early in his life and it is a wonder that he even reached the age of 39 before the disease finally took his life in 1849, after about 15 years of struggle. At this young age, Chopin had composed an amazing amount of works from a wide range of piano genres.

Chopin is known as a romantic composer, using his abilities for the purpose of spellbinding the audience. But within the term romantic lies perhaps the greatest misunderstanding of Chopin's music. Despite the fact that he lived in the romantic era and had a very special use of tempo rubato, Chopin's music is a direct throw-back to the baroque era but in a modern form. Of course, Chopin was greatly affected by the epoc in which he lived in, but his ideas and masters where not his contemporaries - as for example his great love of Bach's music shows. It is in his letters to his pupils where many of his ideas of music and piano playing are found and below are some examples:

- Every pupil, however advanced, should study Clementi's Gradus ad Parnassum.

- Rhythm: The left hand should act like an orchestra conductor...It is the clock...Rhythm must not be violated.

- Rubato is for the right hand and should be restricted to a single bar or a melody figure but for where the rubato resides within the marked dynamics. The Mazurkas are the exceptions.

A lot have been written about Chopin and his music but surprisingly little material highlights his revolutionary compositional style which was setting a new standard to the piano music of his time. I will give a couple of examples below that few people know about.

- It was Chopin alone who invented the concept Etude de concert and this was revolutionary news when the first set op.10 was released. Etudes for concert! Many virtuosos took it to their heart and added Chopin's Etudes to their repertoire.

- Despite the fact that John Field invented the genre Nocturnes, it was Chopin who refined the concept of a singing melody over broken left hand chords to the state of an accepted master music form. And according to my personal view, no composer has been able to steal his crown. Chopin's Nocturnes are still unsurpassed.

- Of course did Chopin not invent the Polonaise and Mazurka but it was he alone who recast the polish folk music into piano form and put it on the world arena.

- A scherzo was before Chopin's op.20 an element of another composition, such as a Sonata. However, Chopin isolated this musical idea, and refined the Scherzo into a genre of its own.

- Chopin's preludes op.28 were at the time of their release a sensation, while also giving rise to confusion. Preludes to what? The question is still unanswered. Among the preludes - these sketch-like masterpieces - can for instance be found the so-called "raindrop prelude" (no. 15). As a sidenote, this prelude was NOT composed in the monastery in Mallorca (Raindrops against the roof) as the famous story tells. It is today proven that it was finished before he even went to Mallorca (see Jeremy Siepmann's biography The reluctant Romantic for more information).

- Last but not least Chopin's Ballades deserve some comments. Chopin worked with the first Ballade on and off for two years and it was again a revolutionary move of Chopin the genius. Until now, the Ballade was a telling story performed by a singer, very often in an act. Chopin succeeded in producing the soul of this story telling by using strictly pianistic means.

The examples above make Chopin greater than any of his contemporaries and constitutes the definition of a true genius: the ability to invent something new.