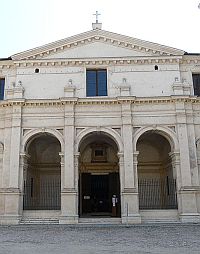 Girolamo Cavazzoni (1525  1577) was an Italian organist and composer, the son of Marco Antonio Cavazzoni. All that is known about Cavazzoni's life is that he worked at Venice and Mantua, and published two collections of organ music. These collections only contain music written before about 1549, but are of high quality, and established the traditional form of imitative ricercars and canzonas.

The composers's years of birth and death are not know exactly. From his his remarks in the preface to Intavolatura libro primo, the first collection of his music, published in 1543, where he states that he is "not much more than a boy", it is deduced that he must have been born around 1525. The second collection of Cavazzoni's music, Intabulatura d'organo, appeared somewhere between 1543 and 1549, and contains no biographical details. Because the last known mention of Cavazzoni is from 1577, naming him as organist of the court church of Santa Barbara in Mantua, we only know he died after 1577.

Cavazzoni's most important works are his ricercars and canzonas, from which the history of imitative ricercars and canzonas starts. The four ricercares of Intavolatura libro primo are multi-sectional works consisting of series of imitative expositions of different subjects. The two canzonas, also contained in Intavolatura libro primo, are similar in design, using short and lively subjects derived from other composers.

There does not seem to exist an image of Cavazzoni, so we show here part of the facade of thge Basilica Santa Barbara in Mantua, where Cavazzoni worked as an organist.