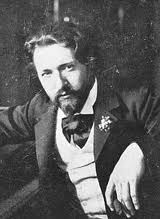 Dante Michelangelo Benvenuto Ferruccio Busoni, Italian composer, pianist, and teacher, was born April 1, 1866 in Empoli, a small province town near Florence. He was the only child of two musical parents, the German pianist Anna Weiss and the Italian clarinetist Fernando Busoni. Fernando sat diligently with his son at the piano for hours each day, and despite his Italian upbringing, Fernando taught his son the music of Bach, Beethoven, Schumann, and Mozart. Ferruccio was a child prodigy and made his public debut at the age of seven in Trieste where he grew up. At the age of nine, and with his father conducting, Ferruccio played Mozarts C-Minor Concerto to rave reviews, which hinted that he might be the next Mozart.

Soon after that, young Busoni traveled with his father to Vienna where he won the admiration of Anton Rubinstein, who in turn presented Ferruccio in a concert where he played traditional pieces and some of his own works.

In 1886 Busoni was on his own for the first time, able to make his own decisions, and earn a living as he wished. Brahms recommended that Busoni move to Leipzig (Germany)  an active arts and music center during the time. Leipzig was full of talented artists and Busoni met Tchaikovsky, Delius, Grieg, Sibelius, and Mahler. With his father ailing and perpetually in debt, Ferruccio wished to send money home and needed a real job. But touring and performing took time away from what he really wanted to be doing, and he wrote to an associate, I always thought of myself first as a composer, then a virtuoso. The world, however, insisted on reversing the process almost to the end of my life. In 1888 he began teaching piano in Helsinki where he met and married his wife, Gerda Sjöstrand.

Busoni continued performing and teaching all over the world: Russia, America  New York and Boston (where his first son was born) and returned to Europe in 1894, settling in Berlin where he opened his house to young artists and composers and championed contemporary music. His own composing took a back seat, as responses from critics to his works were hostile, but he was learning, altering his approach to the classics, and forging ahead with new ideas.

Busoni is well known for his editing of music by other composers. In 1890 he began producing his editions on the music of Bach. He would go on to publish 27 volumes in a complete edition of Bachs music. He also edited works by Beethoven, Brahms, Chopin, Liszt, Mozart, Schumann, and Schoenberg. In the fall of 1890, Busoni played his own arrangements of Liszts A-Major Concerto, his transcription of the Bach: Chaconne (from the Violin Partita No. 2), and the 3rd Paganini Etude, La Campanella. These pieces established Busonis name as a formidable transcriber.

For the next few years, Busoni traveled extensively and collected both admirers and harsh critics toward his revelatory playing. To a critical charge of modernizing the classics, Busoni replied, I try to restore their youth, to present them as they sounded to the people at the moment when they first sprang from the head and pen of the composer. In 1902, some reports said, How can such outrage be performed in the same halls which bears the sacred name of Beethoven? Bartok, himself, received the same reports when he directed his own orchestral suite in the same halls. Busoni was undeterred and continued to gather a small but intensely loyal group of admirers.

The years between 1890 and 1900 brought big changes to Busonis personality. His tour in Italy brought him back to his heritage and he transformed from a German to an Italian artist. In 1904 he premiered his Piano Concerto Op.39, considered to be his instrumental masterpiece. One critic nicknamed it Höllenspektalel, which translates to Pandemonium let loose. The piece is over an hour in length, with an extremely difficult piano part, and performances were few until the 1950s. Since then, pianists have restored it to its rightful place in the repertoire.

After touring in America in 1904 and England in 1905, Busoni was once again asked to teach in Vienna in 1907. But his performing duties made him cancel too many classes and he was fired. One of his students, an American girl, rallied against his being fired and led a protest at the school, threatening they they would withdraw from the school if their favorite teacher was not reinstated. Busoni came back, finished the term and then went back to Berlin where his thoughts turned to literary endeavors after doing more work on Bach and Liszt pieces. In his lifetime he published several libretti, essays and books, most notably, the book titled, Sketch of a New Aesthetics of Music, after learning about a newly invented electronic instrument called a telharmonium, the forerunner of the synthesizer.

In 1910, while in Chicago, Busoni started his best-known and largest piano solo work, the monumental Fantasia Contrappuntistica, based on Bachs unfinished Kunst der fuge (Art of the Fugue).

In 1915 and because of World War I, Busoni sought asylum in Zurich and remained there for five years before returning to Berlin in 1920 where he taught composition. Terrible inflation caused Busoni to completely loose his amassed fortune, and he once again resumed touring. But he stopped in 1922 because of health reasons. He died in Berlin on July 27, 1924 of kidney failure.

Besides his prolific output of Bach and other composers transcriptions and editing, Busoni wrote four operas (most notably Turandot, and Doctor Faust), concertos, chamber music, and songs. His later works are often in an indeterminate key, and many of his pieces are contrapuntally complex. Bach and Liszt were his key influences and some pieces include melodies resembling Mozarts. Among his composition students we count Luigi Russolo, Percy Grainger, Edgard Varese, Kurt Weill, and Stefan Wolpe, composers who played a significant role in developing 20th century music.

-- Monica Hart (more on the author)