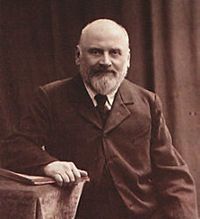 Mily Alexeyevich Balakirev (1837-1910)
Mily Alexeyevich Balakirev, Russian composer, was born in 1837 in Nizhny Novgorod, a provincial town some 400 km east of Moscow, into a poor clerk's family. He received first musical education from his mother, who in 1847 took him to Moscow to receive piano tuition from the famous teacher Alexander Dubuque. After the family's financial situation forced them to return to Nizhny Novgorod, the boy's talent was discovered by Alexander Oulibichev, a local nobleman and patron of the arts, the author of a three-volume study of Mozart, who had a private orchestra and a vast library to which Mili was allowed unlimited access. It was here that he became acquainted with the great classics, and performed at domestic concerts. In 1855, Oulibichev brought Balakirev to St. Petersburg, where he introduced him to the famous Mikhail Glinka, the 'father of Russian music'. The encouragement and support from Glinka launched his career as a composer and performer, and in 1856 he made his succesful debut with a movement from his first piano concerto.

Around Balakirev gathered four similarly minded composers : César Cui, Modest Mussorgsky, Alexander Borodin, and Nikolay Rimski-Korsakov. The five of them became known, after being described so by the influential critic Stassov, as the Moguchaya Kuchka ("Mighty Handful"), better known in English as the "Mighty Five". Their nationalistic stance brought them in direct conflict with the arch-conservative musical establishment of the St Petersburg and Moscow Conservatories, led by Anton and Nikolai Rubinstein, who in turn acccused the Mighty Five of amateurism (not entirely justified, as Balakirev's own teaching was founded on the study of the classics). As a reaction, in 1862 Balakirev, together with the choir conductor Lomakin, established the Free School of Music. The school was hampered by financial problems though, and a nervous breakdown in 1872 forced him to quit the job and become a railway clerk. For many years after, he lived a secluded life, with only occasional musical activities, and eventually became a school inspector and from 1883-1895, when he retired on a pension, was director of the Court Chapel. Mily Alexeyevich Balakirev died on May 29, 1910 and was buried in Tikhvin Cemetery at the Alexander Nevsky Monastery in St. Petersburg.

Balakirev was a man of boundless enthousiasm and initiative. He organized and directed concerts of Russian music and instructed and encouraged the members of his group as well as Tchaikovsky, whom he inspired to writing his greatest work, the Manfred Symphony. He was also intolerant, irascible, and meddlesome, making enemies&nbsp;easier&nbsp;than friends, and his difficult temperament was not to the advantage of his own career. As a composer, Balakirev was influenced by Russian nationalism, and by the music of Liszt and Chopin (whose birth-place in Zelazowa Wola he visited as a pilgrimage). His works include two Symphonies, two Piano Concertos, four Ouvertures (of which the one to ' King Lear' is popular), the Symphonic Poems Tamara and Russia, choral works and songs, and a large body of piano compositions. He also collected and published Russion folksongs, and made numerous piano transcriptions of classical works.

Apart from the virtuoso war-horse Islamey, Balakirev's extensive piano oeuvre has been sadly neglected. Yet, it is considered by many as one of the finest bodies of Russian romantic piano repertoire. His Mazurkas and Nocturnes are sensitive, tender, and passionate works, the second Scherzo is a masterpiece every bit as pianistic as the Islamey, and the late Sonata (written at the age of 70) is a work of astonishing power, poise, and concentration.