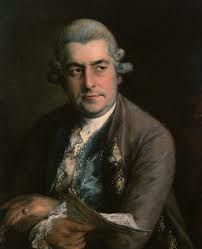 Johann Christian Bach was the eleventh and youngest son of Johann Sebastian Bach (1685-1750) and his second wife Anna Magdalena. He received his first lessons in keyboard playing and composition from his father. Having been born into a long line of musicians, he was obviously destined to become one too, but he didn't like the hard life of his father as a church musician. The legacy Johann Christian inherited from his father was typical for the humble life of the great Thomas cantor: three pianos, a few linen shirts and a small amount of money (thirty-eight Taler). This strengthened Johann Christian's ambition to become a successful wordly musician rather than a relatively poor church and court composer.

It was thus very fortunate that his half-brother Carl Philipp Emanuel (1714-1788), who was already one of the most famous keyboard virtuosos and a renowned music teacher, could take him on for lessons. In Berlin, Johann Christian not only took music lessons with Carl Philipp, but was also exposed to Italian opera, a new music genre that was actively promoted by king Frederick the Great. Fascinated by opera, Johann Christian went to Italy in 1754 to study the subject in detail.

The years spent in Italy were very important for his artistic development. He studied with Padre Martini in Bologna, and later with Giovanni Battista Sammartini, worked as an organist in the Milano Cathedral, and converted from Protestantism to Roman Catholicism. Word of his successes spread quickly, and when it reached London, he was offered the position as official composer at the Kings Theater. He accepted this offer and so in 1762 relocated to England, where he later became the music master of Queen Charlotte Sophia, wife of KIng George III. The early 1770's saw the highlight of his career as a opera composer. So great was his reputation in London, that he became known as the 'English Bach' or the 'London Bach'. But when he became suddenly ill, his popularity quickly waned and eventually he died lonely and forgotten.

The huge influence of Johann Christian on the young Mozart is well known. The two met for the first time in April 1764 in London, and immediately took to each other. Johann Christian became a close friend of the family Mozart, and Wolfgang studied the works of Johann Christian and rearranged them for his own use. Mozart's affection for the Bach son shows in his many letters to his father Leopold. For example he wrote, as he met Johann Christian again in Paris: Mr. Bach from London is already here since fourteen days. [...] You can easily imagine his joy, and my joy, as we saw each other again. [...] I love him (as you well know) with all my heart - I highly respect him.

Johann Christian composed, beside many operas and works for the concert hall, keyboard music of a predominantly light character. Despite much of this keyboard music being intended for social purposes, these pieces should not be regarded as second-rate. The virtues of Johann Christian's keyboard works were aptly summed up by Leopold Mozart in a letter to his son: The small thing is great, when it is written in a naturally fluent and light style and when it is efficiently put in a composition. To compose in this way is more difficult than to write all the artificial and incomprehensible harmonic progressions and hardly performable melodies. [...] This distinguishes the master from the bungler in detail.

Johann Christian left two suites of sonatas (Op.5 and Op.17, each containing 6 sonatas), composed for keyboard solo. Although both suites bear the title For the Harpsichord or Piano Forte, we know that he greatly preferred the pianoforte to the harpsichord. The first sonatas of each suite are so easy that even a beginner could play them. But the other sonatas, especially those from Op. 17, need a pianist with an advanced technique. The suite Op.5 was published in 1768, but the young Mozart had already played the Sonatas Op. 5 from manuscript and in 1765 arranged three of them (Nos. 2, 3, and 4) into his piano concerto KV 107. Karl Geiringer, in his book Die Musikerfamilie Bach, regards the Sonata in C minor Op.5 No.6 as one of the most eminent works by Johann Christian, and also higly praises the noble Andante second movement from the sonata in B flat Major Op.17 No.6.