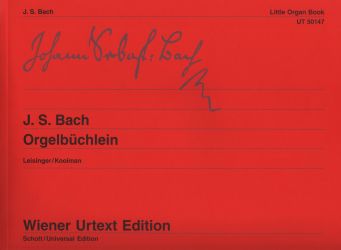 The Orgelbüchlein ("Little Organ Book") is a collection of 46 organ chorales, BWV 599-644, mostly written between 1708 and 1717 when Bach was organist at the Weimar court, and published during his tenure in Anhalt-Cöthen. The dedication, in typical flowery Bach style, reads

In which a beginner organist is given instruction in performing a chorale in different ways and at the same time to accustom himself to the use of the pedals, in that the chorales contained within it the pedal is treated completely obbligato.

To the glory of God on high, and to instruct men thereby.
Author Johann Sebastian Bach, presently Capellmeister of His Serene Highness, the Prince of Anhalt-Cöthen.)
This dedication, as well as the title, suggest a mere collection of pedagogical works for beginning organists. This, however, is a typical Bach understatement. These pieces, while much more compact than the large-scale Leipziger Chorales, Schübler Chorales and the chorales from the Clavier-Übung III, are of the highest musical and technical order, and certainly meant as much for professional as for beginning organists. One might say that the Orgelbüchlein is to the organ what the Well-Tempered Clavier is to the piano or harpsichord.