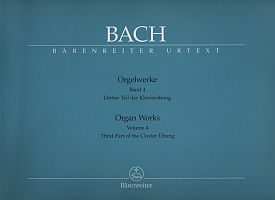 Clavier-Übung III is the third installment of Johann Sebastian Bach's ambitious series of Clavier-Übungen (Keyboard Exercises). Unlike the other three volumes, which contain music for the harpsichord (the 6 Partitas in Volume I, the Italian Concerto and the Ouverture in French Style in Volume II, and the Goldberg Variations in Volume IV), Clavier-Übung III is written for the organ. This heterogenous collection consists of multiple settings of the German Kyrie and Gloria, BWV 669-677, the Four Duets for organ manualiter, BWV 802-805, and, framing it all, the imposing prelude and fugue BWV 552 which is also known as St. Anne's prelude and fugue. The collection of Chorale Preludes from the Clavier-Übung III is often referred to as the German Organ Mass.