Bach was during his lifetime famous as an organist virtuoso. As a composer his reputation was restricted to a fairly narrow circle and his music was regarded by many as old-fashioned. His published works today fill many volumes, but in his lifetime fewer than a dozen of his comopsitions were printed, and for half a century after his death this position was only slightly improved until in 1801 the Well-Tempered Klavier was issued. The revival of interest in Bach's music may be dated from the Berlin performance of the St Matthew Passion on March 11, 1829, conducted by Mendelssohn. Systematic publication of his works by the Bach Gesellschaft began in 1850 to mark the centenary of his death.

Bach's supreme achievement was as a polyphonist. His German Protestant religion was the root of all his art, allied to a tireless industry in the pursuit of every kind of refinement of his skill and technique. Sonata form was not yet developed enough for him to be interested in it, and he had no leaning towards the (to him) frivolities of opera. Although some of the forms in which he wrote - the church cantata, for example - were outdated before he died, he poured into them all the resources of his genius so that they have outlived most other examples. The dramatic and emotional force of his music, as evidenced in the Passions, was remarkable in its day and has spoken to succeeding generations with increasing power. Suffice it to say that for many composers and for countless listeners, Bach's music is supreme - to quote Wagner: the most stupendous miracle in all music. 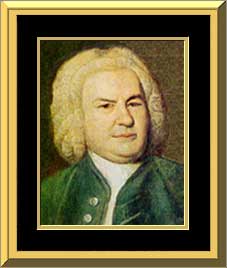 Bach almost had to be a musicianeveryone else in his family was and many relatives to him still are. He was born in 1685 in Eisenach, Germany. His father taught him to play the violin. Both of Johanns parents died before he was ten, and he went to live with his older brother. By age fifteen, he was supporting himself.

Bach spent most of his life as an organist, choir director, orchestra conductor, and composer, for either a church or court, or both at once. After some smaller jobs, he became the main musician for the Duke of Weimar, in Germany. This meant doing all the work of a church musician plus composing instrumental music for palace concerts. As a church musician, Bach had to write all his own music for every Sunday, until his collection became large enough that he could occasionally reuse it. The reason why Bach (and other composers by his time) composed his own music for all the church events is that otherwise, he would have had to copy another composers music by hand. A less interesting and, to a genius like Bach, almost as much effort as composing himself.
When Bach wanted to leave the Duke for a job in Cöthen, the Duke threw him in jail. This happened in the days before labor unions. After his release, he started working for the court of the prince in Cöthen, who favored instrumental music over fancy church music. As a result, Bach wrote more instrumental music than church music during his time in Cöthen.

The 23-year-old Prince Leopold was himself a highly-gifted musician who made his court an important musical center. Besides recognizing Bach's artistic genius, the Prince formed a warm personal attachment to the Bach family, even being godfather to one of Bach's children. Since the Cöthen court was in a Calvinist region of Germany, music was barred from local churches. Bach's work therefore was almost exclusively for Prince Leopold's household band - 18 musicians of the highest caliber - and was devoted to instrumental music. During his stay in Cöthen Bach composed concertos, inventions, sonatas, suites, including the Brandenburgs and the Well-Tempered Clavier. As a side-note, I cannot help mentioning that Bach only named the first Volume of 24 preludes and fugues Well-Tempered Klavier (or rather "Das Wohl Temperierte Clavier"). The second volume was only named by Bach as "24 preludes and fugues".

This period would have been the happiest of Bach's life had it not been for the untimely death of Maria Barbara in 1720. Bach lost a wife in the same year that Leopold found his, and both events proved unhappy occurrences for Bach. Leopold's new bride had no appreciation of music and, smitten with her, the prince neglected, and then finally disbanded his fine orchestra. In 1723, nearly 40 years old, remarried to professional singer Anna Magdalena and with a growing family, Bach started looking for another job.

He would spend the longest portion of his career, the last 27 years of his life, in Leipzig. Ironically, the Bach's illustrious present-day reputation is so identified with Leipzig; yet back in 1723, in appointing Bach, the town felt it had been unsuccessful in hiring the best candidate and had to "settle for a mediocre one". For his part, Bach accepted the post with hesitation, feeling that the title of cantor was a significant step down from that of capellmeister. Nevertheless, the job at Leipzig was considered a very prestigious one, because of the caliber of men who had filled the position, and because of Leipzig's long-standing reputation as a commercial center and a bastion of learning and religion.

Bach had twenty children with two different wives. Only nine children survived to see adulthood. His first wife, Maria Barbara, was also his cousin. After she died, he married his second wife, Anna Magdalena. She was a singer and keyboard player, and helped Bach with his work. Many of the children also were trained to help Bach copy out music parts for Sunday mornings.

In later life, Bach became blind, and his compositions lost their popularity. He died of a stroke in 1750, and his music would remain unappreciated for many decades. However, Felix Mendelssohn's celebrated performance of Bach's St. Matthew Passion in 1829 was important in putting Bach's name back on the musical map, and his popularity has only increased since.

Bach's music reconciles these two aspects; the horizontal (melodic) and the vertical (harmonic) in complete balance. While his music often has the linear complexity of Renaissance polyphony, it also has a sure and inevitable harmonic architecture that always gives the music a sense of solid form and direction. Bach's music also synthesizes the prevailing French and Italian styles that dominated the Baroque era. The Italian style, with its emphasis on operatic singing and string playing, tends to be more rhythmically straight forward, emotionally extroverted, and prone to the use of repeating harmonic sequences. French music, on the other hand, grows out of a love for wind instruments and dancing, and the emotional quality is often subtle and less overt.

Bach's cosmopolitan style is a result of the fact that he travelled very little, although in his youth he did famously walk 200 miles to hear Buxtehude play the organ. Most of Bach's working life was spent as a Kapellmeister of various important churches, where he was responsibl 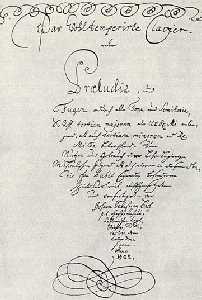 e for the music performed at weekly Sunday services. However, it could have ended as early as when he was 17 years old as he once, when the church was closed, invited a girl up to the organ, which in these days, was a strictly forbidden place for a woman to be. It is told that they were caught "making out" by the holy father himself and the event was reported to a higher instance. If it had not been for his known extrem capabilities of composing and his virtuosic abilities on the organ, he would have been forced to change his direction of life and we would never have known his beautiful art. Maybe an act of God after all?

Bach's devout Lutheran faith pervades all his works and one cannot fully understand him without knowing many of the over two hundred sacred cantatas he wrote for Sunday services (such as Mer hahn en neue Oberkeet; and Jesu, Joy of Man's Desiring from "Herz Und Mund Und Tat Und Leben"), or the great masses and passions, such as the Mass in b and the St. Matthew Passion, written for Easter and other high holy days. Here one can discover the elaborate use of musical figures employed to express text, which also pervade the purely instrumental music.

Throughout his life, Bach seemed to be driven to systematically explore all the possibilities of a given style or genre. In his organized and numerologically based way there are six Brandenburg Concerti - the essence of the Italian style as opposed to the four Orchestral Suites, (including the Allegro from the Brandeburg Concerto No.1; the Adagio from No.2, and the Allegro from No.5), six of each of the keyboard suites mentioned above, six cello suites, six solo violin works, etc. Each of the pieces in these collections explores or emphasizes another possibility within the type. A veritable bible for musicians, the two books of The Well-Tempered Klavier (includes the Prelude and Fugue No.1 in C and Prelude and Fugue No.17 in Ab from Book 1, and the Prelude and Fugue No.13 in F# from Book 2) twice present preludes and fugues of every imaginable type in every key. The miracle of these pieces is that the overwhelming intellectual mastery is always in the service of an even higher emotional character and spirit, explored with unending variety. At the end of his life Bach was still exploring the ultimate possibilities of counterpoint in The Art of the Fugue (contains Contrapunctus 12 rectus and Contrapunctus 12 inversus) and The Musical Offering.

Bach left supreme works in every genre of his age except opera. Ironically this great conservative who really did nothing new, but only better and more completely, is for many musicians the true beginning of modern music. In many works (for example in the chromatic variations of the Goldberg Variations) we can see the the future's harmonic possibilities.