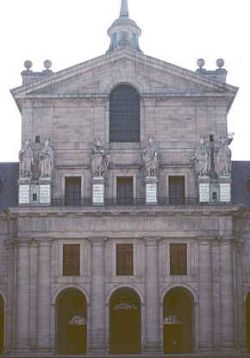 Padre Antonio Francisco Javier José Soler Ramos, Spanish composer, was born in 1729 in the village of Olot in the Catalan province of Gerona in northern Spain. Little is known about his life, nor are there any known images that show us what he might have looked like (the picture on the right is of the cathedral of the Escorial where Soler worked and died).
Soler received his musical education at the Benedictine monastery of Montserrat. In 1752 he joined the Hieronymite order at the royal palace of El Escorial in Madrid, where he became a priest as well as maestro de capella. He studied with Domenico Scarlatt in Madrid. In addition to being a prolific composer, Soler was interested in mathematics, and the theory and history of music. He wrote an important and controversial book called Llave de la modulación (Key to Modulation). Like Bach, he was also consulted about the construction of new organs. Soler died in El Escorial in 1783.
The body of Soler's oeuvre consists of vocal and choral works (Masses, hymns, requiems, psalms, motets, and over 130 "villancios"), chamber music (six quintets for string quartet and organ, and six concerts for two organs), and keyboard works.
Among his keyboard works we count some 200 sonatas, playful and exuberant one-movement works modeled after the sonatas of Scarlatti. His most popular work (although of doubtful authenticity) is the famous Fandango, an imposing set of variations on a Spanish fandango theme.