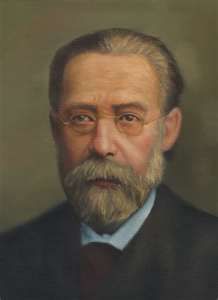 Bedrich Smetana was born in 1824 in Litomysl in the North-East of Bohemia. His father, a brewer and an amateur violinst, soon recognized his son's precocious musical talent (Bedrich already performed his first concert at age six), but he did not envisage a musical career for his son, and sent him to the Classical Gymnasium for a regular education. The young Bedrich however was more interested in practising the piano, visiting concerts and attending dance parties, and soon decided he wanted to be a musician. His passion for dancing and Czech music (especially dance music like the Polka, which became highly popular throughout the whole of Europe at that time) were influential in composing his earlier works, like his first Polkas, Wedding Scenes and other minor works.

After attending several high schools he finally finished his studies in Pilsen and moved on to Prague, where he was able to study music with the blind pianist Josef Proksch, the only real music teacher he ever had. Afterwards, Smetana started his career as a music teacher, composer and concert pianist, and devoted much of his efforts to improving the level of Czech cultural and musical life, becoming also a conductor, choirmaster and co-founder of musical institutions. He established his own musical school where he used progressive methods focusing not only on technique, but also on the theory and aesthetic of music. Here, he composed some of his first important works, like the Piano trio in G minor.

Whan his career faltered because of financial problems and a lack of interest in the Prague conservative society, Smetana accepted a lucrative offer from Sweden, and in 1856 he moved to Goteborg, where he met with great acclaim as a pianist, conductor, composer and teacher. Eventually, however, homesickness got the better of him and in 1861 he returned to his beloved Bohemia, where he continued his efforts to uplift Czech musical life. After becoming a conductor in Prague Theatre he composed some of his most important works, like the opera The Bartered Bride.

Smetana's life is fraught with tragedy. After first losing his three daughters, his beloved wife died of tuberculosis. Even though he remarried, Smetana was unable to find true personal happiness again. In 1875 he became deaf as a result of progressing syphilis, and on top of that he suffered from chronic tinnitus. Being a truly great composer this however did not stop him from creating his greatest works yet, like the magnificent cycle of tone poems Ma Vlast (My Fatherland), of which everybody knows the famous Vltava (The Moldau). In 1883 Smetana, suffering further progressive neurological effects of his illness, was declared insane, and was taken to a mental hospital in Prague, where he died the following year. He is interred in the Vyehrad cemetery in Prague. Smetana is nowadays considered one of the greatest Czech composers as well as one of the foremost representants of the romantic nationalistic movement.

As a pianist, Smetana was influenced by Clara Schumann and Liszt. The ever-generous Liszt thought highly of Smetana, and helped him in publishing his first opus, the Six Characteristic Pieces, as well as providing funds for establishing his own school. The two composers became good friends and visited each other regularly. Smetana's proficiency at the piano was all the more remarkable for not having had extensive formal training, and never having been a full-time concert pianist. Contemporary reports likened his technique to that of Liszt, and his Chopin playing was highly praised by Hans von Bülow. Even after becoming totally deaf, Smetana's performances were said to be as inspired and haunting as always.

Smetanas large body of piano works is sadly unknown and underrated, and yet contains some of the finest, most colourful and virtuosic of all romantic repertoire. There are three main categories  lyrical pieces, mostly influenced by Chopin or Schumann (like the Bagatelles and Impromptus, Skizzen, and Reves), virtuoso pieces in Lisztian mood (Concert Studies, Fantasy on Czech Folk Songs, Macbeth and the Witches) and dance pieces (Polkas, Czech Dances). Many of these are very demanding pianistically, blending Czech rhythms and folk melodies with a truly Lisztian technique.