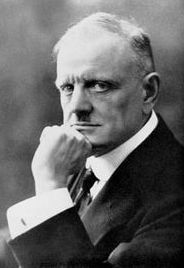 Jean Sibelius, the foremost Finnish composer, was born in Hämeenlinna in 1865, and died in Järvenpää in 1957. From 1886 onwards he studied music in Helsinki with Martin Wegelius, and later in Berlin with Albert Becker, and finally in Vienna with Karl Goldmark and Robert Fuchs. His initial ambition was to become a concert violinist but ultimately he was drawn to composing, partly through the influence of Ferrucio Busoni whom he befriended during his studies in Helsinki. His first major composition, the choral symphony Kullervo, written shortly after finishing his studies, was a huge success, which immediately secured his place as an important composer.

From the very beginning, Sibelius was deeply inspired by the Finnish nationalist movement and the Finnish mythology, which is reflected in many of his early masterworks like the Karelia and Lemminkäinen Suites and the symphonic poem Finlandia. The latter earned him such fame that he was awarded a lifelong government stipendium, which allowed him to live comfortably until his death. In fact he hardly composed anything after 1926. Over time, his style evolved into a more abstract and modal style. However always, in some way or another, his music evokes the Finnish landscape and culture - or perhaps that is just what we want to hear in it.

Sibelius is considered one of the greatest symphonists of the 20th century, and his seven symphonies are landmarks in the repertoire, ranging from the Tchaikovsky-inspired first (1889) to the austere seventh (1924) with its echoes of the Palestrina madrigale style. The influence of these symphonies, especially on Scandinavian and Anglo-Saxon composers, can hardly be overestimated.

Besides the symphonies, Sibelius's fame rests chiefly on the hugely popular Violin Concerto (1903) and his orchestral suites and tone poems, the most important being the Karelia Suite (1893), the Lemminkäinen suite (1895), containing the famous 'The Swan of Tuonela', Finlandia (1900), Pelléas et Mélisande (1905) and the bleak Tapiola (1926) which seems to invoke the atmosphere of the innumerable Finnish lakes and vast birch woods. Sibelius also composed many choral works, a large number of songs, some chamber music and incidental music for the theatre, like the charming Valse Triste (1903), and many piano works.

Sibelius was not a good pianist, and admitted to not liking the piano much. Yet he produced a large number of piano pieces, mostly salon-like miniatures grouped into sets of varying size. He dutifully composed these to keep his publishers happy while they were eagerly waiting for his next symphony to be completed, and evidently his heart was not always in them. These pieces are generally regarded as mere "chippings from the master's workbench" but there are many charming items to be found. The Sonatinas and the 3 Lyric Pieces 'Kyllikki' have gained some degree of popularity, and in his late piano pieces some of the grandeur of the symphonies shines through. Sibelius's piano music can not by a long stretch be considered pianistic or even important, but the best items are well worth listening to, a fact that is increasingly being reappreciated in recent years.