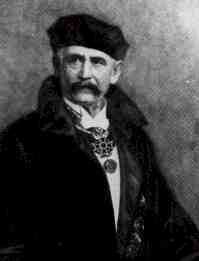 Franz Xaver Scharwenka was born in 1850 in Szamtoly near Posen, Prussia (now Poznan, Poland). Like his brother Ludwig Philipp, he showed an early attraction to and natural talent for the piano. In 1865 the Scharwenka family moved to Berlin; both brothers were accepted into the prestigious Neue Akademie der Tonkunst of the great piano pedagogue Theodor Kullak. Xaver studied piano with Kullak himself, and composition with Richard Würst. He made his debut at the age of eighteen at the Berlin Singakademie. In 1868/9 Breitkopf und Härtel in Leipzig published Xaver's first compositions: the Piano Trio no. 1 in F sharp minor Op. 1; the Overture in G; the Violin Sonata in D minor Op.2; and his famous 5 Polish Dances for the piano Op.3.

In 1874 Xaver toured extensively and was praised for his interpretation of Chopin. Three years later he composed his Piano Concerto No.1 Op.32 in B flat major, dedicated to Franz Liszt, and married a former student Zenaide Gousseff.

In 1881 Scharwenka opened his own conservatory in Berlin. Although this did constrain the time he could devote to composing, he composed his Piano Concerto No. 2 in C minor Op.56 and the three-act opera Mataswintha which was performed in Weimar and in the Metropolitan Opera in New York City in 1897. Xaver made his first trip to the United States of America in 1890 and eventually emigrated there after his second successful tour to the U.S. He also opened another conservatory in New York in 1891. He moved back to Berlin in 1898 but made regular visits to the United States up until the start of the First World War. He composed his fourth Piano Concerto in F minor, Op.82, in 1908, and in 1910 he premiered it under the baton of Gustav Mahler. The last fourteen years of his life were mainly devoted to composing for pedagogical purposes, and running his conservatory. In 1922 his autobiographical work Klänge aus meinem Leben was published.

Xaver Scharwenka died in Berlin in 1924, seven years after his brother Philipp. His compositions are not great in number and without his famous Polish Dance in E flat minor No.1 Op.3 (which sold millions in its day), Scharwenka's music may well have sunken into oblivion. These days his works are starting to be heard again, thanks to the advocacy of pianists like Earl Wild, Stephen Hough, Marc-André Hamelin, and above all Seta Tanyel, who has recorded his complete solo piano repertoire for Hyperion Records.