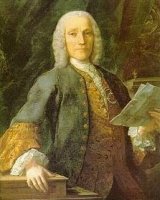 Italian composer and harpsichordist, son of A. Scarlatti. Thought to have been pupil of his father and after 1708 of Pasquini and Gasparini in Venice, where he met Handel. In 1709, according to one biographer, Handel's patron, Cardinal Ottoboni, arranged a friendly kebaord contest between Handel and Scarlatti which was a tie, Handel being adjudged the better organist and Scarlatti the better harpsichordist. Worked in Rome 1708-19. Choirmaster to Queen of Poland, composing operas for her private th. in Rome. Choirmaster, Cappella Giulia at St Peter's 1714-19. Court harpsichordist to King of Portugal and teacher of Princess Maria Barbara in Lisbon 1719-28; returned to Italy on leave 1725-9; accompanied Maria Barbara to Spain on her marriage to the Spanish Crown Prince in 1729. Stayed in Madrid for rest of his life, becoming Maria Barbara's maestro de cámera when she became queen. Domenico did for keyboard-playing what his father did for opera, by imparting to it a hitherto unsuspected freedom of style. Introduced many new technical devices (rapid repetitions, crossed hands, double-note passages, etc.) and the 550 single-movements sonatas he wrote in Spanish are exercises (esercizi) as well as innovatory compositions foreshadowing sonata form. Also composed 14 operas, masses, Stabat Mater for 10 vv., Salve Regina, cantatas, at least 12 concerti grossi, 17 sinfonias, and organ fugues. His works have been catalogued by R. Kirkpatrick.