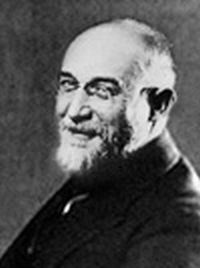 Erik Alfred Leslie Satie was born May 17, 1866 in Honfleur, Basse-Normandie, France. Satie was a music composer and a performing pianist, though mainly for café- and cabaret audiences. Satie wrote theatre and ballet music, as well as piano music. His compositions are original, humorous, often bizarre and very minimalistic. His music is sometimes called furniture music, supposed to be in the background of everyday life. It is evidently anti-romantic and also anti-impressionistic.

Satie eventually became a leading figure of the French avant-garde. He did not begin to be taken seriously as a composer by his contemporaries until he was in his forties. In 1917 the first performance in Paris of the ballet Parade (the orchestration of which included parts for typewriter, foghorn and rattle) caused a scandal, which established his name as a composer. Satie wrote this ballet together with Jean Cocteau and Pablo Picasso for the Russian impresario Diaghilev, leader of the Ballets Russes. His other works include: Trois Gymnopédies (1888), piano; Trois morceaux en forme de poire (1901), piano four hands; Messe des Pauvres (1895); Descriptions Automatiques (1913), piano; Sonatine Bureaucratique (1917), piano; Socrate (1918), symphonic drama; Relâche (1924), ballet. Recordings of his complete works have recently been published on Swedish Society Discofil, performed by Olof Hojer.

Erik SatieSatie gave his piano pieces names like Unpleasant Glimpses, Genuine Flabby Preludes (for a dog), or Old Sequins and Old Breastplates. He accompanied the scores of these pieces with all kinds of written remarks, through which he insisted that these should not be read out during performance.

It is a well-documented fact that every day of his working life Satie left his apartment in the Parisian suburb of Arcueil to walk across the whole of Paris to either Montmartre or Montparnasse before walking back again in the evening. Satie was known as an eccentric and amongst other things he started his own church (with himself as only member). Debussy and Ravel were among his friends. He was not hailed by the masses, but was admired by many young composers and musicians. In fact, Satie was the center of the Groupe des Six, a group of six French composers (Auric, Durey, Honegger, Germaine Tailleferre, Milhaud and Poulenc). The group advocated clear musical language, and opposed impressionism (for example Debussy and Ravel ), slavism (Stravinsky) and post-Wagnerism (Schönberg) in music.

Erik Satie died on July 1, 1925 and is buried in Cimetiere d'Arcueil, Arcueil, France.