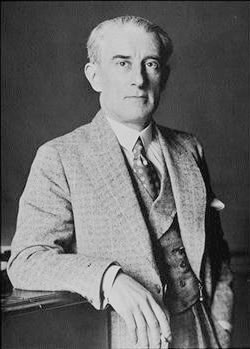 Joseph Maurice Ravel, French composer, was born in 1875 in the Basque town of Ciboure, near Biarritz, as the son of a Swiss father (an inventor and industrialist) and a Basque mother. After the family moved to Paris, the 7-year-old Maurice started piano lessons, and he entered the Paris Conservatory in 1889, studying piano with Bériot, counterpoint with Gédalge, and composition with Gabriel Fauré. Ravel was not an especially precocious pupil; he remained at the Conservatory for 16 years, during which time he composed and hung about with a group of young avant-garde artists who called himself the Apaches. This illustre group included Leon-Paul Fargue, M.D. Calvocoressi, Paul Sordes, Maurice Delage, and the Catalan virtuoso Ricardo Viñes. Ravel dedicated each movement of his piano suite Miroirs to one of them.

From 1901 until 1905, he tried in vain to win the prestigious Prix de Rome for composition, and was eventually forbidden to try it once more. The ensuing scandal lead to the resignation of the conservatory director Dubois (who was succeeded by Fauré), and Ravel leaving the conservatory. By this time, he had already found a distinctly personal style of composition, based on classical values but being frowned upon in academic circles because of its often unusual harmonies.

During the first World War, Ravel was denied active army service because of his age and frail health, but he nevertheless served his country as an ambulance driver. In 1920, the French government awarded him with the Legion d'honneur, which he declined. In 1928 he met with great acclaim during a piano tour of the United States of America, where he met George Gershwin, and was awarded a honorary doctorate by the Oxford University. In 1932 Ravel suffered a car accident from which he never fully recovered, and his output dropped dramatically. He died in 1937 after an unsuccesful operation on a brain tumour, and was buried in Levallois Perret in western Paris.

Although Ravel is often compared to Claude Debussy (and indeed, the two composers did know and influence each other), Ravel was more a classicist than an impressionist, being more influenced by ancient mythology and the concertos of Mozart and Saint-Saëns than by Wagner, whose music he disliked. He was also drawn to jazz and music from Spain and Russia. A fastidious worker, he honed his works to perfection, leading to Igor Stravinsky's famous quip about "Ravel the Swiss Watchmaker". Ravel was a master orchestrator, who spent much of his time orchestrating piano works by himself and others, notably Debussy and Moussorgsky (whose Pictures of an Exhibition have become far more famous in Ravel's orchestration than in their original piano version). He worked with the famous choreographer Sergei Diaghilev in stage productions of his ballets Ma Mère l'Oye and Daphnis et Chloé.

Ravel did not leave a very large oeuvre, but nearly all his compositions are masterworks. Among the most popular are the ballets Daphnis et Chloé (1912) and Ma Mère l'Oye (1915), the operas L'Heure espagnole (1907) and L'Enfant et les sortilèges (1925), the orchestral works Rhapsody Espagnole (1907), La Valse (1920), and the famous Boléro (1928), the song cycles Shéhérazade (1920) and Don Quichotte à Dulcinée (1932), the Tzigane for violin and piano/luthéal (1924) and the two jazz-inspired piano concertos (1931), one of them for the left hand alone. He also wrote excellent chamber works, and a number of piano pieces.

The piano works of Ravel occupy a special place in the French repertoire. His greatest achievement, Gaspard de la Nuit (1908), is one of the supreme virtuoso challenges of all times. The other important works are Jeux d'eau (1901) , Miroirs (1905), Sonatine (1905), Valses nobles et sentimentales (1911) Le Tombeau de Couperin (1917), and the ever-popular Pavane pour une infante défunte (1899, orchestrated in 1910).