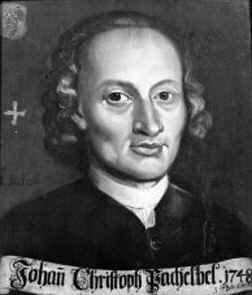 Johann Pachelbel, German composer and organist, was born in 1653 in the city of Nuremberg in south eastern Germany. His musical talents were apparent from a young age, and besides being a gifted high-school student, he received musical training from Heinrich Schwemmer and organist Georg Caspar Wecker, and soon held his first job as organist to the Pfarrkirche. In 1670 he enrolled in the Gymnasium Poeticum in Regensburg, and studied music outside the Gymnasium with Kaspar Prentz, who introduced Pachelbel to Italian music. In 1673, Pachelbel traveled to Vienna, where he studied with Johann Kaspar Kerll and found a job as deputy organist at the Stephanskirche.

In 1677, he returned to Germany and settled in Eisenach in Thüringen, where he became close friends with the Bach family, and was appointed court organist for Prince Johann Georg of Sachsen-Eisenach. By this time he was already being recognized as one of the leading German composers and organists, and described as "a perfect and rare virtuoso". A year later he was invited to become organist at the Predigerkirche in Erfurt, a post he held for 12 years. During this time, he taught Johann Christoph Bach, the elder brother of J.S. Bach.

In 1690, Pachelbel relocated to Stuttgart to become court organist for Duchess Magdalena Sibylla of Württemberg, and in 1692 he returned to Thüringen, to become town organist of the city of Gotha. By this time he was so famous he was offered jobs in Oxford and Stuttgart, but he declined both offers. In 1695, he returned to his hometown of Nuremberg, to succeed his mentor Wecker, who had died, as&nbsp;organist at the Sebalduskirche. He held this position until his death in 1706.

Johann Pachelbel is considered a prime exponent of the North German organ school, who through his studies in Vienna introduced Italian and Catholic influences to the Lutheran organ tradition. Like Dietrich Buxtehude, he was an important precursor of Johann Sebastian Bach (Carl Philipp Emanuel Bach explicitly mentioned Pachelbel as a composer whom his father had admired).

Pachelbel's name will be forever linked with the ubiquitous <i>Canon in D, </i>but he was predominantly an organ composer. He wrote 95 fugues on the Magnificat, some 70 Chorale Preludes, and other organ works like fugues, ricercars and toccatas. Besides organ works he wrote some twenty suites for harpsichord, a large number of motets, arias and cantatas for the Lutheran church and concertos chamber sonatas for various instruments, especially the violin. Regrettably, many of his compositions have been lost.