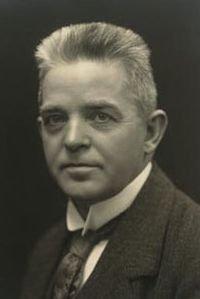 Carl Nielsen, one of Denmarks most beloved musicians and composers, was born on June 9, 1865. As a young boy he was interested in music and managed to learn violin and piano with very little formal instruction. He eventually learned trumpet as well, and because of that skill was able to get an appointment as a military musician with the 16th Battalion at Odense.

A few years later, Nielsen entered the Copenhagen Conservatory of Music on a hard-won scholarship. There he studied violin and music theory. He realized that his great interest was in composition, however, and he began to compose, although Nielson had no formal schooling in that area. Success came slowly. At first he had to supplement his income from composing by performing and conducting. Interest in Nielsens music blossomed after several performances of his first symphony, which garnered opportunities and commissions for him. In 1906 Nielsen teamed up with historian Vilhelm Andersen and the result was an opera based on Ludvig Holbergs comedy Mascarade. The project was at first regarded by many as sacrilege, but in the end the opera proved a resounding success with its audiences and Nielsons popularity and commissions surged skyward.

At the acme of his career Nielsen reached a crisis, one both personal and professional. He began to be attracted to other women other than his sculptor-wife, Anne Marie, and this led to Nielsens two illegitimate children and Anne Marie and Nielsens separation in 1919. Also, Nielsens conducting at the Royal Theatre caused him much conflict with his colleagues and authorities there. Nielsen resigned from his long-held position as a result. And, to crown the crisis, Nielsen suffered a heart attack.

Life began to look up for Nielsen after a time, however. His period of illness reunited him with his estranged wife and their three children, and he again took up his pen. During this time Nielsen wrote his important wind quintet, inspired by a rehearsal he heard of Mozarts Sinfonia Concertante. He also wrote several concertos for solo wind instruments that have become staples of the repertoire.

Nielsens health began to slip again but he refused to slow down, still voraciously composing and conducting his works. This period was very fruitful, yielding several piano piece sets, an organ work, and a couple of cantatas, among other things. While taking part in a production of Masquerade, Nielsen suffered several small heart attacks. His condition gradually deteriorated until he was hospitalized on October 1, 1931. He died two days later.

Nielsen left behind numerous fine works. Arguably his most monumental accomplishment was his six symphonies. His two operas, choral works, and numerous songs were also masterful accomplishments in their respective genres. Nielsen wrote several pieces for chamber ensemble and concertos for string and wind instruments as well. Nielsens output for solo piano amounted to thirteen opus numbers, written through the course of his life; these pieces are largely rich miniatures in which the composers artistic development is wonderfully displayed. Indeed, Nielsen left a breathtaking legacy of magnificent music for future generations to enjoy.