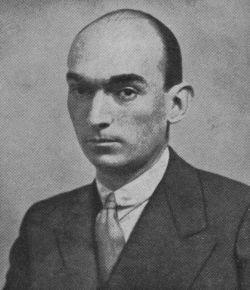 Federico Mompou, Catalan composer and pianist, was born in Barcelona in 1893. He studied piano at the Conservatorio del Liceo in Barcelona and gave his first concert at the age of 15. However, his shy and reticent nature did not predestine him to be a virtuoso performer, and he decided to become a composer after hearing Gabriel Faure perform his Quintet. Three years later, with a letter of recommendation from Granados, he went to Paris to study harmony and piano with Isidor Philipp and Ferdinand Motte-Lacroix. In Paris, he became influenced by the French impressionism of Debussy Satie. At the outbreak of World War I in 1914, Mompou returned to Barcelona, where he wrote his first works for the piano.

In 1921 Mompou returned to Paris where he remained for 20 years and became a respected composer. In 1941 he settled permanently in Barcelona. He was made a Chevalier des Arts et des Lettres by the French government, elected to the Royal Academy of San Jorge in Barcelona and of San Fernando in Madrid, and made Doctor Honoris Causa at the University of Barcelona. He married the Catalan pianist Carmen Bravo in 1957, and died in Barcelona on June 30th, 1987.

Mompou was a modest, quietly spoken, and thoughtful person and this is reflected in his music. He wrote no operas, concertos or symphonies, and some choral works are as close as he got to producing large-scale works. He was predominantly a composer of lyric songs and piano miniatures. The music is imbued with the colours, sounds, and images of his beloved Catalonia, the style ranging from elegantly impressionistic to simplistic and minimal. Here we see the influence of Satie in using the utmost economy of means, doing away with key signatures and bar lines, and occasionally inserting silly comments. As a young man, Mompou worked briefly in a bell factory, and the sound of bells can be heard throughout his works. For Mompou, less is more, and one needs a finely attuned ear and a responsive state of mind to properly appreciate his music.