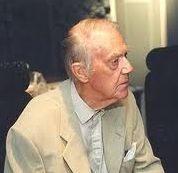 Erland von Koch is the doyen of Swedish music. Born in 1910, he debuted in the 1930s and is still active today. His 'Rondinato' for orchestra was premiered in September.

"I still write, but I'm not as active as I was before. My eyesight is not quite as good, and also I have become more critical with age."

Despite this he carries on working every day, and between other smaller pieces he focuses on his dream project - he prefers not to say exactly what that is, but does reveal that it is a large orchestral work that has developed gradually over a couple of years.

His father was composer Sigurd von Koch (1879-1919), and as a boy Erland would lie beneath the grand piano and hear Wilhelm Stenhammar and Ture Rangström play, among others. Since that time he has met many of the big names in 20th century music, including Rachmaninov, Bartók, Stravinsky, Hindemith and Alfvén.

Although he grew up in musically rich surroundings, music was never the obvious option for Erland von Koch. It was not until his teenage years that he began playing piano and soon became interested in jazz. Together with some friends he formed the first jazz band - 'Electric Band' - at Östra Real secondary school in Stockholm, and he led the 'Diddle Kiddies' and 'Optimistic Stompers', always in dark glasses in case a teacher happened by.

At the end of the 1920s he won two composition contests organised by the Edda upper secondary association. His interest in music grew, and he gradually began considering a future as a composer.

Studies at the Royal Swedish Academy of Music followed, resulting in a degree in music majoring as a cantor and organist. This was followed by composition, conducting and piano studies in Berlin. The plan was to study under Hindemith, who unfortunately fell into disfavour with the Nazis and was forced to hand Erland von Koch over to his friend and colleague, Paul Höffer. He chose Claudio Arrau as his piano teacher and for conducting he studied under Clemens Krauss.

I ask him what he considers his biggest success as a composer.

"I would say my 'Liten svit för kammarorkester' (Small Suite for Chamber Orchestra), op. 1, which I debuted with - both as composer and conductor - at the Academy in 1934."


The 1930s Generation and the Monday Group

When Erland von Koch returned to Sweden in the late 1930s he was voted into the Association of Swedish Composers, FST, and he made his definitive breakthrough with 'Piano Concerto No. 1' which premiered in 1938 with the Stockholm Concert Association and pianist Herman Hoppe.

Erland von Koch, Lars-Erik Larsson, Dag Wirén, Hilding Hallnäs and Gunnar de Frumerie all debuted in the 1930s after studying in France and Germany. They all had similar aesthetic values, and came to be known as 'Trettiotalisterna', literally 'the Generation of the 1930s'. Their music is relatively accessible and they were more influenced by Bartók, Hindemith and Honegger than by Schönberg and twelve-tone music.

The younger, radical generation which eventually made up the so-called 'Monday Group' came into opposition with the 'Trettiotalisterna', whom they considered far too traditionalistic. The Monday Group and its advocates had a strong influence on the Swedish music scene for a long time, partly because they held most of the important administrative positions. The 'Trettiotalisterna' felt left out in many respects, but the audiences appreciated their music.


Folk music and the Sami

During the 1940s, Erland von Koch became interested in Swedish folk music. Over the next decade this led to a series of works with some degree of folk musical influence, such as 'The Oxberg Variations' (1956), 'Lapland Metamorphoses' (1957) and 'Dance Rhapsody' (1957). As recently as 1990 he wrote 'Bilder från Lappland' (Images of Lapland), six choral songs based on Sami 'yoik' chants.

Personally, Erland von Koch thinks that he has been too readily and arbitrarily associated with folk music. After all, folklore is one of many elements in his style, and it is now almost fifty years since he moved on to concentrate on other styles.

This is how he describes his journey between the styles: "A tendency towards neo-classicism during the 1930s, a 'romantic' period around the mid-40s, orientation towards a more modern expression in the 1960s, and since then greater freedom encompassing all the trends and isms."

Even so, his interest in folk music and Sami chants strengthened his involvement in the Sami cause and environmental issues, which was expressed most powerfully in his symphony No. 5, 'Lapponica'. It was dedicated to the Sami people and is a kind of protest music against the way this indigenous people has been treated.


The melody is key

Erland von Koch's portfolio encompasses a large number of works in varying styles and forms. It includes 6 symphonies, 15 solo concerts, 12 'Scandinavian dances', the 'Impulsi' and 'Oxberg' trilogies for orchestra, the children's opera 'Pelle Svanlös' (Pelle - the Cat with the Very Short Tail), 5 ballets, an extensive repertoire of songs and even a few hymns.

"That's right, there's plenty on my conscience," he jokes.

He has also composed several solo works, some of the better known being those entitled '18 Monologues' - a series of skilfully executed studies of the orchestral instruments' capacity and expressive scope.

In addition - often simply to make a living, as he puts it - he has written the music for around 30 films, including half a dozen by Ingmar Bergman.

Animated rhythmic aspects - perhaps influenced by his time as a jazz pianist and by Bartók - are characteristic of Erland von Koch's music, as is the prominent role he assigns the melody. "The way I see it, the melody is the key element, the very life and soul of the music, and I have always endeavoured to cultivate its many expressive qualities," he explains.

Alongside his composing, Erland von Koch also worked as a harmony teacher at the Royal College of Music in Stockholm between 1953 and 1975. During the 1940s he was employed at Radiotjänst as conductor and harmony expert, and was also chairman of the Fylkingen New Music & Intermediate Art Society. He became a member of the Royal Swedish Academy of Music in 1957 and a professor in 1968.

Over the years he has been awarded a large number of prizes and distinctions: the Christ Johnson Prize in 1958, Vasaorden (RVO) in 1967, Litteris et artibus in 1979, the Atterberg prize in 1979 and the Alfvén prize in 1981. He was awarded the Royal Swedish Academy of Music medal for musical promotion in 2000.

Erland von Koch likes to quote Sibelius: "Don't think that the years make it any easier to compose music - it just gets harder and harder." At the same time, though, he says he is an incurable optimist:

"Above all I think that music can help us see - and even trust - the powers of good in life."

Note! The biography is printed on Piano Society with the acceptance of the Swedish organisation STIM