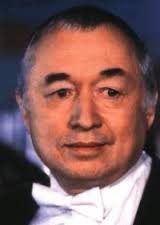 Murad Kazhlayev, a composer and conductor, was born in Baku, Russia in 1931. He graduated from the Baku State Conservatory. There he studied composition with Boris Zeidman. Kazhlayev was a teacher at the Tchaikovsky Music School in Makhachkala. He was the chief conductor of the Dagestan Radio Symphonic Orchestra and later the Artistic Director of the Dagestan Philharmonic Hall Orchestra. And for 10 years he was in charge of the Variety Symphonic Orchestra named after Y. V. Silantyev. Most recently he established the Dagestan Musical School for Gifted Children. He also founded a museum dedicated to the musical culture of Dagestan affiliated with the school. Kazhlayev has been recognized and awarded several times including the prestigious People’s Artist of the USSR and the Order for the Merit for Dagestan Republic.