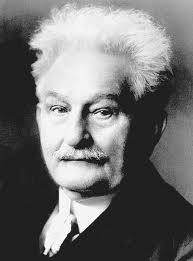 Born on July 3, 1854 in Hukvaldy, Moravia, Leo Janácek showed musical promise very early in life. His talent first manifested itself in vocal ability; the young boy received his first studies in choral singing at the Abbey of St. Thomas in Brno, studying under the tutelage of Pavel Kríkovský. While there he also learned to play the piano and organ. When Janácek was 20 years old he entered the Prague organ school. Although suffering extreme poverty, Janácek managed to make the most of his studies underneath Frantiek Skuherský and Frantiek Blaek. He graduated with honors in 1875 in spite of being nearly expelled from the school for a published criticism of one of his teacher's performances. Shortly thereafter, Janácek began teaching privately and at Berno's Teachers Institute.

Though pleased with his position at the Institute, Janácek soon desired to acquire more musical training. After several months at Leipzic Conservatory, Janácek transferred to Vienna Conservatory. He only stayed two months, however, due to criticism of his composition and piano performance styles. In Brno again, Janácek settled down and married one of his former students, Zdenka Schulzová, and took an appointment as director of the Brno organ school. This position enabled Janácek to begin to compose more systematically, as well as begin to become more involved in music criticism. During this period, too, the young man became fascinated with folk melodies and began to weave them into his work.

In the new century, fresh compositions continued to flow from Janácek's pen. His sacred composition Ave Maria and the popular piano cycle On an Overgrown Path were two of the works from this era of his career. Some of these works developed as a result of sorrow in Janácek's life. He and his wife had already lost a son in 1890; to compound his sorrow, in 1902 his beloved daughter Olga became seriously ill. In 1903 she died. Janácek expressed his deep grief through composing his noted opera Jenufa.

After only one performance of Jenufa in his hometown, Janacek was unable to stage any further performances of his opera. Grieved, exhaused, and dejected, Janácek journeyed to the Luhacovice spa to recover his strength and compositional inspiration. He eventually found his verve again and set to work on a set of notable choral, chamber, and orchestral works, as well as several operas. In this surge of productivity, Janácek received great encouragement; his opera Jenufa was performed in Prague's National Theatre to enthusiastic audience members and critics alike. Finally, Janácek had recieved notice and acclaim.

This was also a time of new professional and personal relationships. In 1916, Janácek became associated with Max Brod, a critic, dramatist and translator. Janácek also met a new love, singer Gabriela Horváthová. Upon hearing about the relationship, Janácek's wife, Zdenka, attemped suicide and "informally divorced" her husband. A year later, Janácek met a very young married woman, Kamila Stösslová, whom he passionately and obsessively loved and corresponded with until his death. The woman provided inspiration for a book and many musical works.

In 1920, Janácek retired from his teaching position at the Brno Conservatory. However, he continued to teach privately until 1925. He still kept his pen busy; in the autumn of his life, he produced some of his best works, like the Sinfonietta and Glagolitic Mass. In 1926, he traveled to England, greeted by a warm welcome and many London performances of his works, which led to more international exposure for the composer.

As Janácek neared the end of his life, he composed two last masterpieces: the operatic work The House of the Dead, and his "manifesto on love," the "Intimate Letters" string quartet. On a trip to tramberk with Kamila and her son, Otto, Janácek received a chill and fell ill with pneumonia. He breathed his last on August 12, 1928 at Ostrava. He was laid to rest in the Field of Honour at the Central Cemetery in Brno.

Janácek's musical legacy is extensive. Arguably his best works lay in the operatic medium: Jenufa, of course, as well as Káta Kabanová, The Cunning Little Vixen, The Makropulos Affair, and From the House of the Dead. His two string quartets are standard repertory in chamber music. The Sinfonietta, the Glagolitic Mass, and the Tara Bulba rhapsody are other well-known works of Janácek. While Janácek wrote relatively few piano works, the two books of On an Overgrown Path, the I. X. 1905 Piano Sonata, and the cycle In the Mists remain beloved works in the pianists' repertoire.