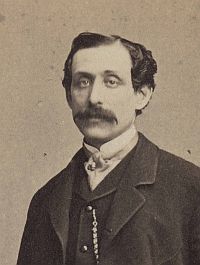 Louis Moreau Gottschalk was an American virtuoso pianist and composer of romantic and popular multicultural music. He was born in the French Quarter section of New Orleans in 1829. His family cultural heritage was European and Louisiana Creole, and the cultural identity of the city was largely Creole. Encouraged to embrace music from very early age, he was exposed to the French and African-tinged Caribbean folk music that characterized the music of the Creoles. At age three he began to play piano, quickly showing exceptional natural technical abilities and innate skills as an improviser.

In 1840 (age 11) Gottschalk made an informal début at the St. Charles Hotel, identified in the programme as a young Creole. Although he had performed many recitals in salons of wealthy New Orleans households he had not yet performed in public concerts. In the début programme he performed a popular Latin dance tune and improvised a set of variations with a very personal imprint. The début was very successful and Gottschalk gained recognition around the New Orleans music community.

In 1842 (about age 13), he and his family decided that a high level classical music education in Europe would be appropriate and necessary for the young prodigy to grow into a mature artist. Gottschalk left the United States and sailed to Europe to fulfill his musical ambitions. His experience there began with with disappointment, having been refused admission to the Paris Conservatory. Persistent, he then studied privately with Karl Hallé, Camille-Marie Stamaty and Pierre Malenden (the latter teaching composition). Culturally well-groomed, he spoke impeccable French (his native language from New Orleans), and was fluent in English, Spanish, Italian and German. He socialized in the upper echelons of the Parisian art music community meeting Chopin, Berlioz, Liszt, and other famous composers. Frédéric Chopin was quite impressed with Gottschalks technical abilities as a pianist. Gottschalk made his highly successful professional concert début in Paris in 1849. He further developed his career as a concert pianist touring Europe, dazzling audiences with his virtuoso playing and Creole-inspired compositions.

Despite his success in Europe, Gottschalk became skeptical of European musical life. He ridiculed the cult of the genius (the long hairs) and the grotesque idiosyncrasies developed by some of his European fellow pianists. In 1853 he decided to return to the United States. The return might also be viewed as an opportunity for Gottschalk to capitalize on his European reputation and establish himself in an open field free of competition. Gottschalk established an intense touring schedule in 1854. He toured extensively from Cuba to Canada and throughout the United States. He never married, preferring instead to travel and from 1857 to 1862 to trace his Creole history back to the Caribbean region as well as Cuba and South America.

In 1862, he returned to the United States in the midst of the American Civil War (1861-1865). He embarked on yet another grueling cross-country tour, averaging one recital a day for nearly three-and-a-half years, throughout the Civil War. Although a native of New Orleans, Louisiana, he very much opposed the secessionist movement of the 11 Southern States and described the American Union as "one of the most beautiful of political monuments. He sometimes performed close to the battlefields, where he would play his patriotic piece, The Union (A Concert Paraphrase on National Airs), for Federal troops. In 1864, Gottschalk would perform The Union for President Abraham Lincoln and an audience at the White House.

From 1865 until his death in 1869, Gottschalk, after having been falsely accused of seducing a young California woman with whom he was seen after hours, was forced by the scandal to travel to Latin America. After three years in Peru, Chile and Uruguay, playing recitals and presenting a series of Berlioz inspired monster concerts, he arrived in Rio de Janeiro in May 1869. Six months later, weakened by overwork and a tropical fever, he collapsed during a recital: after playing his own composition called Morte!!! (She is dead!!) (1868). Louis Moreau Gottschalk died Saturday, December 18, 1869, in Tijuca (Brazil).

Much has been written about Gottschalks technical abilities as a virtuoso pianist. Unfortunately, there are no recordings of his performances to preserve this legacy. His status as a composer and his choices of Creole influenced concert material however, is controversial and received much negative criticism from elitist puritan critics. As a result, his works (with the exception of a few pieces) have been forgotten. He is generally regarded as a minor figure in 19th century American music. Despite fading into artistic obscurity, Gottschalk has been championed by important 20th century writers such as Harold C. Schonberg, Robert Offergeld, and Lincoln Kirstein. American concert pianists and scholars Eugene List, Jeanne Behrend, and John Kirkpatrick performed his works regularly. In summary he might be best described as an An American Original (with natural inclination to be an ethnomusicologist) who sought to foster a distinctively American musical culture.