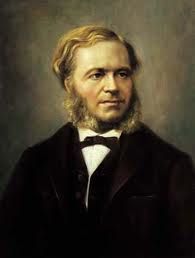 César-Auguste-Jean-Guillaume-Hubert Franck was a French composer, organist and pianist of Belgian origin. He was born in 1822 in Liège, Belgium, and was initially destined by his father to be a virtuoso pianist. After studying at the conservatoire in Liège, he briefly made concert tours as a pianist, before leaving for Paris in 1835 to study with Anton Reicha. In 1837 he was admitted to the Conservatoire and studied there until 1842. Having failed to make sufficient name for himself as a performer, he devoted himself to composition, and made his living as an organist and teacher.

In 1853, Franck became choirmaster, and in 1858 organist, of the church of Sainte-Clotilde, where his performances on the Cavaillé-Coll organ, and his ability as an improviser, drew listeners from far and wide, including Liszt who in 1866 likened his skill to that of Bach. He was professor of organ at the Conservatoire from 1872 until his death. His compositions were largely ignored and misunderstood by the mainly opera-minded Paris public. This however did not perturb the gentle-minded composer, who was known to his pupils as "Pater Seraphicus". He gained considerable influence through his classes and performances, rekindling an interest in 'pure' music. His pupils (who included Vincent d'Indy, Ernest Chausson and Henri Duparc) organized a concert of his works in January 1887. It was poorly performed, but Franck was pleased all the same. He was awarded the Légion d'Honneur in 1885, but only for his organ playing, not for his achievements as a composer. César Franck died in 1890 and was buried at the Cimetière du Montparnasse in Paris.

Franck's music is romantic and expansive in style, influenced to some degree by Wagner but yet having a very individual touch due to its contrapunctually complex structure and religious inspiration. His mature works deploy the cyclic form, where a theme, modified or varied, recurs in each section of the work. His most successful compositions are the oratorium Les Béatitudes (1880), the Symphony in D minor (1886-1890), the Symphonic Variations for Piano and Orchestra (1885), the Prelude, Choral and Fugue for piano solo (1884) and the Sonata for violin and piano (1886). He also wrote three operas, symphonic poems, chamber music, masses and offertoires, and piano and organ music.

Franck did not write very much for the organ, despite the fact that he is considered by many as the greatest organ composer since Bach. His 6 Pièces (1862), 3 Pièces pour Grand Orgue (1878) and the 3 Chorals (1890) are pinnacles of the organ repertoire. From his piano oeuvre, the early, flamboyantly virtuosic, works like the Grand Caprice op. 5 (1843) and the Ballade op. 9 (1844) have not gained repertoire, but the Prelude, Chorale et Fugue (1882) and the Prelude, Aria et Finale (1886), are supreme masterpieces, the former being in many great pianists's repertoire.