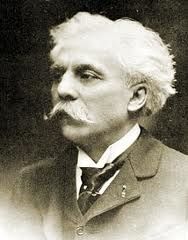 Gabriel Urbain Fauré, French composer, was born in 1845 in the southern French town of Pamiers in the Midi-Pyrénées, as the youngest of six children of Toussaint and Marie Fauré. He showed musical abilities from an early age, improvising on piano and the local church harmonium, but his parents thought nothing special of it. Eventually one of his teachers recognized his talent and recommended that he be sent to the Ecole Niedermeyer, a newly established school of religious music in Paris. Here one of his teachers, after the demise of Louis Niedermeyer, was Camille Saint-Saëns, with whom he established a life-long friendship. He studied here for eleven years, learning all the traditional skills, and becoming such a good pianist that he was excluded from competetion after winning first prize two years in a row.

During the Franco-Prussian War in 1870-1871 Fauré served as a messenger in the army, and took part in several battles, for which he was awarded the Croix de Guerre. After the war he returned to Paris and found work as second organist at the church of St. Suplice, where he worked closely with Charles-Marie Widor. In 1877, through the influence of Saint-Saëns and Charles Gounod, he was appointed maître de chappelle at the Madeleine, the most important church after the Notre-Dame, which post he held until 1896. In 1897 he obtained a teaching position at the Paris Conservatoire, where his pupils included Maurice Ravel, Georges Enescu, Nadia Boulanger, Charles Koechlin, and Florent Schmitt. From 1905 until 1920, when he retired, he was director of the Conservatoire. He died of pneumonia in 1924, and was buried in Passy cemetary in Paris.

Fauré was an elegant, attractive and agreeable man, and this is reflected in his music. His early works display the influence of Saint-Saëns, Mendelssohn and Schumann, while some of his late works, partly because of his progressing deafness, partly because of his eveloving harmonic language, attain a Beethovenian austerity. He wrote two operas, orchestral works (though no symphonies or concertos), chamber music, song cycles, and piano works.

Some of his most popular works are the Ballade for Piano and Orchestra (1881), the Pavane (1887), the Requiem (1887), the Dolly Suite for two pianos (1896), the incidental music to Pelléas et Mélisande (1898), and the suite Masques et Bergamasques (1920). His piano quartets and quintets are masterpieces, and some of his exquisite songs, particularly Après un rêve and Clair de Lune, have gained huge popularity.

Fauré's piano works span his entire career, from the glittering early works in the style of Saint-Saëns to the reticent and ruminative late pieces. There are five Impromptus (1881-1909), four Valses-Caprices (1883-1894), nine Preludes (1910-1911), thirteen Barcarolles and thirteen Nocturnes that take their clue from Chopin, the Theme et Variations op. 73 and the 8 Pieces Breves Op. 84. All works are cornerstones of the French piano repertoire.