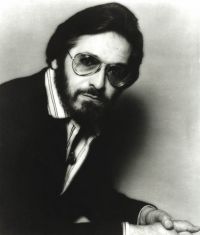 Bill Evans, American jazz pianist/composer, was one of the most influential pianists of his time. He is best known for his lyrical playing style and reforming jazz voicings on piano.

Born William John Evans in Plainfield, New Jersey, he used to eavesdrop on his older brothers piano lessons and then sneak to the piano afterwards and play from ear what he had heard. Bills talent soon became apparent and he began his own piano lessons at age 6. His mother was an amateur pianist and had stacks of music books in the home. Most of it bordered heavily on 20th century composers. Bill never liked practicing scales and exercises and instead poured through and enjoyed playing works by Stravinsky, Debussy, Ravel and Milhaud. Later, he told a colleague that he also played Bach, which helped him gain control over tone and to improve his physical contact with the keyboard.

Evans also became proficient on the flute, played in the high school band, and received a music scholarship to Southeastern Louisiana College. He graduated in 1950 with a degree in piano performance and teaching. After that he was drafted into the army and was stationed in Chicago for three years where he played flute, piccolo, and piano in the army bands. Next, he went to New York where he took postgraduate courses and met composer George Russell, whose Lydian harmonic system he adopted. Evans joined Russells avant-garde band in 1956 where he further developed modal playing.

In 1958, Evans joined Miles Davis band and in less than a year produced ten albums with Davis. The most epochal is the Kind of Blue album. But in this short period, Evans grew uncomfortable with his position in an all-black group, he heard criticism that he didnt play hard enough and that his playing was too delicate, and he disliked all the traveling. He also wanted to form his own band.

The influence of impressionistic composers such as Debussy, Ravel, and Satie gave Evans his trademark introverted relaxed and lyrical style of playing jazz. He is also credited with changing the way chord voicing was used by jazz pianists. Before then, chords were expressed with the traditional root, 3rd, 5th, 7th or 9th. Evans either left the root for the bass player, or played it with the left hand on a separate beat in the measure. The system is now explained in books on jazz piano theory and technique, and even classically trained pianists follow his chord voicings to the letter. Pianist Jean-Yves Thibaudet has recorded note-for-note transcriptions of Evans performances, showcasing the direct connection with classical composers.

Bill Evans developed the trio concept of equal interplay among musicians and in 1959 formed his most innovative and celebrated trio with bassist Scott LaFaro and drummer Paul Motian. The three musicians worked together like they had telepathy, and produced four albums before LaFaros tragic death in a car accident. Evans would later form several different trios. Evans signed with Verve in 1962 and experimented with recording in different formats such as big band and full orchestra. The album, Conversations With Myself, was a remarkable experiment in which Evans overdubbed second and third piano parts onto the first. It earned him his first Grammy award.

Evans battled a drug addiction for many years  first heroin and later cocaine. Towards the end of 1980, he went to the hospital complaining of severe stomach pains. He died there on September 15th from a bleeding ulcer, cirrhosis of the liver, and bronchial pneumonia.

Despite his troubled life, Bill Evans managed to always bounce back with more confidence, fresh energy and exciting playing with his latest trio. He recorded over fifty albums and received five Grammy awards. His reflective and gentle style, matching his character, is what touches listeners of his music the most.

Article written by Monica Hart (more on the author...)