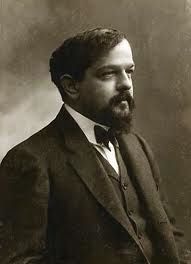 Claude Debussy was born in St. Germain-en-Laye in 1862 where his parents owned a china shop. Debussy began music instruction when he was nine years old, but his talents soon became evident and at age ten Debussy entered the Paris Conservatoire. Debussy studied with Ernest Guiraud, César Franck and others at the Paris Conservatoire (1872-84). From 1880 to 1882 Debussy was employed by Nadezhda von Meck (Tchaikovsky's patron), giving music lessons to her children.

As the winner of the Prix de Rome, he received a scholarship by the Académie des Beaux-Arts, which included a four-year residence at the Villa Medici, the French Academy in Rome to further his studies (1885-7). According to letters from this period, Debussy often was depressed and unable to compose, but he also met Franz Liszt, and finally composed four pieces, which were sent to the Academy; the symphonic ode Zuleima (after a text by Heinrich Heine), the orchestral piece Printemps, and the cantata La damoiselle élue (1887-88), which was criticized by the Academy as "bizarre" and in which some stylistic features of Debussy's later style emerged for the first time. The fourth piece was the Fantaisie for piano and orchestra, which was still indebted to César Franck's music and withdrawn by the composer himself.

With his visits to Bayreuth (1888, 1889) Debussy was exposed to Wagnerian opera, which was to have a lasting impact on his work. Wagner's influence is evident in the La damoiselle élue and the Cinq poèmes de Baudelaire (1889) but other songs of the period, notably the settings of Verlaine (Ariettes oubliées, Trois mélodies, Fêtes galantes, set 1) are in a more capricious style.

Later, in Paris, during the Exposition Universelle (1889) Debussy heard Javanese gamelan music. Although direct citations of gamelan scales, melodies, rhythms, or ensemble textures have not been located in any of Debussy's own compositions, the equal-tempered pentatonic scale appears in his music of this time and afterward.

Beginning in the 1890s, Debussy developed his own musical language largely independent of Wagner's style and heavy emotionalism. In contrast to the enormous works of Wagner and other late-romantic composers, Debussy chose to write in smaller, more accessible forms. Debussy's String Quartet in G minor (1893) paved the way for his later, more daring harmonic exploration. In this work he utilized the Phrygian mode as well as less standard scales, such as the whole-tone, which creates a sense of floating, ethereal harmony.

Influenced by the contemporary symbolist poet Stéphane Mallarmé, Debussy wrote one of his most famous works, the revolutionary Prélude à l'après-midi d'un faune. In contrast to the large late-romantic orchestra, Debussy wrote this piece for a smaller ensemble, emphasizing orchestral colours and timbres of the instruments. Even if Mallarmé himself and Debussy's colleague and friend Paul Dukas were impressed by this piece, the work caused controversy at its premiere; the composer Camille Saint-Saëns for example thought it "pretty" but lacking any "style". It subsequently launched Debussy into the spotlight as one of the leading composers of the era.

In reaction to Wagner and his highly elaborate late-romantic operas, Debussy wrote the symbolist opera Pelléas et Mélisande, which would be his only finished opera. Based on the play by Maurice Maeterlinck, the opera proved to be immensely influential to younger French composers, including Maurice Ravel. Pelléas, with its rule of understatement and deceptively simple declamation, also brought an entirely new tone to opera  but an unrepeatable one. These works brought a fluidity of rhythm and colour quite new to Western music.

Claude Debussy died in Paris on March 25, 1918 from rectal cancer, during the bombardment of Paris by airships and long-distance guns during the last German offensive of World War I. This was a time when the military situation of France was considered desperate by many, and these circumstances did not permit his being paid the honour of a public funeral, or ceremonious graveside orations. The funeral procession made its way through deserted streets as shells from the German guns ripped into his beloved city. It was just eight months before victory was celebrated in France. He was interred there in the Cimetière de Passy, and French culture has ever since celebrated Debussy as one of its most distinguished representatives.