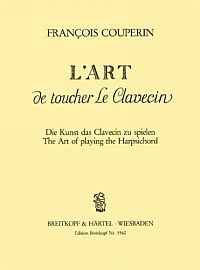 Couperin wrote L'Art de toucher le Clavecin (The Art of Touching the Harpsichord) in 1716m and revised it in 1717. This set of miniature pieces is special in Couperin's output. Apart from the 27 Ordres, Couperin wrote a method intended for his pupils (he had many during his life, including some sons and daughters of the King). This method consists in a text giving advice for playing ('touching') the harpsichord with a special emphasis on ornaments.

As examples, he provides an introducing Allemande, which is close to Bach's inventions and preludes (let's recall that Allemande means German in French). But the eight preludes which follow are typically French baroque, some of them inspired by his predecessors like d'Anglebert or Louis Couperin (his uncle), who liked to write 'préludes non mesurés' (non-measured preludes). These short pieces have a very free shape and seem to have been improvised. But the writing is very precise and elegant, and the harmony surprising and poetical. Couperin proposes to use these preludes as a trial of the instrument before playing a suite ('Ordre') of the same tonality.

L'Art de toucher le clavecin is very popular among harpsichordists, who consider it as a masterpiece of the harpsichord literature.